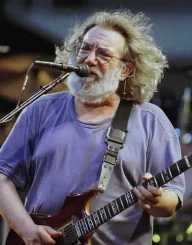 He was born Jerome John Garcia on August 01, 1942 in San Francisco, California. His parents were Jose Ramon Joe Garcia and Ruth Marie Bobbie. They were music fanatics, and that explains why they named him after Jerome Kern, a music composer. He had one older brother.

From a very young age, Jerome was in love with music. His music loving parents also encouraged him to pursue his passion.

In 1947, while on a fishing trip Jerome’s father drowned. His mother became the breadwinner, and the two brothers went to live with their grandparents. Eventually, his mother remarried.

Jerry attended Monroe Elementary School and there his artistic abilities came to the fore. While he grew up, he became passionate about rock and roll and rhythm and blues. He was deeply influenced by the likes of Ray Charles, B.B. King, John Lee Hooker, Hank Ballard and Chuck Berry.

As a student, he was notorious for bunking and fighting with fellow students. It is no surprise then that he moved to several schools, such as Menlo Oaks, Balboa High, and Analy High School.

A fatal car accident in 1961 claimed the life of one of his friends. This was a serious awakening, and he pledged to change his life for the better.

Jerry Garcia formed a band in 1965 named the Warlocks. This was changed a year later to the Grateful Dead upon discovering another group with the same name. The band was heavily involved with the Hippie San Francisco movement using drugs. Initially, they played “Psychedelic” rock but later played more diverse repertory rock of the 1970s.

Around 1974, the band disintegrated, and Garcia made solo appearances and albums. By the 1980s, he was heavily addicted to drugs and in 1985 was arrested and sent for drug treatment at a center. He survived a diabetic coma and again decided to turn his life around. In 1987, the band regrouped and made a hit single, “Touch of Gray,” followed by an album, “In the Dark.”

Jerry Garcia is tagged as an American musician and guitarist, one of the founders of the rock band, The Grateful Dead. The bond is fondly known for its unique and eclectic style. It uses elements of rock, folk, bluegrass, reggae, and psychedelia.

He was prominent as the group’s lead guitarist and vocalist during the counterculture ear. He was considered to be the exceptionally popular mouthpiece of the showstoppers. The Grateful dead reigned in the music world not only in America but worldwide for three decades.

Apart from the Grateful Dead, Garcia also got involved in other projects, notably the Jerry Garcia Band.

Jerry Garcia was closed to David Grisman, the bluegrass mandolinist. They often collaborated and played together. In spite of being talented and creative, Garcia also had an ugly side. He was a drug addict and a heavy smoker. He had diabetes, and in the 1990s, his health took a turn for the worse.

The Grateful Dead enjoyed a new streak of success and toured the country. They drew legions of fans –new and old- to their shows. Over decades, they managed to amass a guitar-strong following that was a more of a fan club called “deadheads.”  These loyalists were known to travel with them to concerts countrywide. The show, however, could not go on indefinitely.

All the accumulated years of drugs and heavy smoking ultimately caught up with him. On August 09, 1995, in Forest Knolls, California, Jerry Garcia finally succumbed to heart failure.

For his prototypical psychedelic persona, Jerry Garcia was dubbed Captain Trips. He was called Uncle Jerry for his pleasant onstage demeanor. The Deadhead address him, and the critics jeered him for his extended guitar jams, which they considered tedious and purposeless.

There is no question that his musical guitar sounds were unique. Additionally his subtle, woeful, rough around the edges vocals defined the psychedelic San Francisco music in the 1960s.

Jerry Garcia was a cultural and musical model, whose ethos and improvisatory style was to be imitated and developed upon by a generation of followers.

Jerry Garcia began using cocaine and heroin. He married Walker in 1981. His life was more a messy affair at this point. The uncertainties were massive around him.

He began another relationship with Manasha Matheson, which produced a daughter – Keelin Noel Garcia in 1987. He was still with Matheson in 1993 when he began seeing another woman. He reunited with Koons and married her on February 14, 1994.