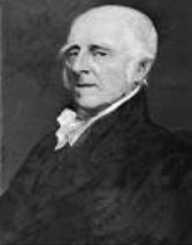 John Stevens was born on June 24, 1749, in New York City, Province of New York, British America. He was an American Inventor, engineer, and lawyer best known for his first invention of the steam locomotive in the United States. He also constructed the first steam-powered ferry and was a significant figure in the creation of the United States patent laws. He died on March 6, 1838, in Hoboken, New Jersey at the age of eighty eight.

John Stevens was born on June 24, 1749, as the one and only child of politician John Stevens Jr. and Elizabeth Alexander. He grew up in a very wealthy family and studied at King’s College in New York City graduating in 1768. He studied law and practiced as a barrister in New York. In 1776 he was enlisted in the Washington army and served as a captain in the Revolutionary War. He was promoted to the rank of colonel later while still in service.

He also served as treasurer in the state office at New Jersey in collecting taxes. In 1784, after the war, he used his earnings to purchase a piece of land known as William Bayard’s farm at Hoebuck which later was named Hoboken located in New Jersey.

In the 1780s, John Stevens became fascinated with steam navigations and aspired to invent machinery which could be used in locomotion. He took up the initial designs of earlier inventors James Ramsey and John Fitch which he began working on. He came up with his designs of boilers and engines which he felt required legal protection. This fear led him to urge the United States government to come up with patent laws which were later established in 1790.

He worked alongside his brother-in-law who was also interested in constructing a steamboat mode of transport. He furthered his work to complete his ship known as the Phoenix which culminated in 1808. In 1809, the Phoenix made its first historical journeys to Philadelphia, Pennsylvania. It first began the journey by sea and later made its voyage on the oceanic waters being the first successful steamboat in a large water body. He licensed his steamer for commercial purposes which became a major ferry service then providing transportation between Hoboken and New York City.

He was also convinced that a locomotive rail service would be of the essence when he saw that the steamboat services were a success. In 1815, he was granted the first license for railroad services by the New Jersey authorities. After ten years of work and toil, his first steam locomotive made a successful ran on a circular rail track he had built in his estate at Hoboken. His inventions ware among the first to be witnessed in the United States.

John Stevens married Rachel Cox on October 17, 1782, and together had thirteen children out of whom seven were sons and six daughters. He was stricken by age. However, he saw his dreams of emerging railway and ferry services come true. His legacy remains known as the father of steamboats, railroads and the patent system in the United States. He died on March 6, 1838, at the age of eighty-eight in Hoboken, New Jersey, United States.