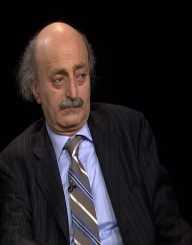 Walid  Jumblatt was born on 7th August 1959, to Kamal Jumblatt and Princess May Arslan. His father, Kamal, was the founder of the Progressive Socialist Party.

Walid Jumblatt was an only child. He graduated in 1982 from The American University of Beirut with a degree in political science. It was quite clear he would follow in his father’s footsteps.

When he graduated university, Walid Jumblatt worked as a reporter for a couple of years. His employer was An Nahar, based in Beirut.

Walid Jumblatt succeeded his father as heir to the Progressive Socialist Party, and as well as leading the political party, is also leader of the Druze clan, which is a religious cult of the Arab world, based in Lebanon, Syria, Palestine, Jordan, and Israel.

In the latter part of the 1970s, Walid  Jumblatt ’s father, Kamal, was assassinated. Although not fully equipped at the time for the task, Jumblatt was thrust into the leadership role of the Progressive Socialist Party that his father had formed.

In 1983, Amine Gemayel became president. When this happened, the National Salvation Front was formed by Jumblatt, Rashid Karami, and Suleiman Frangieh. The Front was backed by Syria. Rashid Karami became prime minister, and in 1984 under his leadership, Walid  Jumblatt was the Minister of Public Works, Transport, and Tourism.

Walid Jumblatt publicly supported Syria, but when the Syrian President, Hafez Assad, died in 2000, Walid Jumblatt then began to campaign for Damascus to release its control of Lebanon. In 2009, Walid Jumblatt won a seat in the general elections. He had been a publically of Assad for several years, but when the opportunity arose to break the ties, he could do it, with the support of the Druze clan.

During the Syrian Civil War, Walid Jumblatt was pivotal in negotiations to do with the Syrian Druze. He wouldn’t denounce Al-Nusra, saying that he couldn’t classify them as terrorists like the Western countries, because most of them were Syrian.

Walid Jumblatt is a staunch supporter of Al Nusra, which is the equivalent of Al Qaeda in Syria. Over the years, he also stood firm in his support for Yasser Arafat and the PLO and had always supported the unification of the Arab world, particularly as leader of the Druze.

Walid  Jumblatt has been married three times. He was only 20 when he first got married. Walid  Jumblatt married an Iranian actress, but his father did not approve. His second marriage was to Julia Ammar, who bore him his first child, Taymour. Ammar was Lebanese, and a member of the Druze clan.

Taymour is Walid  Jumblatt s rightful successor as leader of the Progressive Socialist Party and is being groomed to take over from his father. After the assassination of the Lebanese Prime Minister, Rafik Al Hariri, Walid Jumblatt moved his children to France for their wellbeing, as Taymour had received several death threats, which were taken seriously.

Walid  Jumblatt ’s third marriage was to Nora Sharabati, who is the mother of his two other children, Aslan and Dallia.