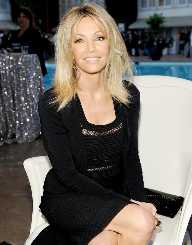 American actress Heather Locklear was born on the 25 September 1961 in Los Angeles, California to Diane and William Locklear.

After graduating from high school, Locklear spent a year as a student at the University of California in LA before dropping out to concentrate on working as a model.

While breaking into acting, Heather Locklear worked as a model and also did television commercials. Early appearances on television included parts in Chips; Eight is Enough and small roles. Her debut film was Firestarter (1984), a sci-fiction horror film.

She came to attention when Heather Locklear appeared in the television series Dynasty. Aaron Spelling cast her as Sammy Jo Dean in the second season of the soap opera. He also gave her a role in T.J. Hooker, a cop show which starred William Shatner. She continued appearing in T.J. Hooker until 1986. From 1986 until 1989 she was a cast member of Dynasty and also appeared in Dynasty: The Reunion (1991).

Her next significant role, also for Aaron Spelling, was in Melrose Place where Locklear played the part of Amanda Woodward (1993-1999). Other Spelling shows she appeared on included Fantasy Island, The Love Boat, Matt Houston and Rich Men, Single Women. She was also in Texas Justice (1995) and Shattered Mind (1996), both television movies. Spin City was Locklear’s next successful television series. It also starred Michael J. Fox and Charlie Sheen.

Heather Locklear married Tommy Lee in 1986, and they remained together until their divorce in 1993. She then married Richie Sambora (1994-div.2007). She has one child, a daughter Ava Sambora.