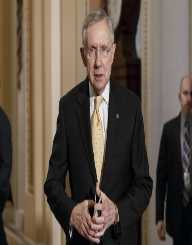 Harry Reid was born on December 2, 1939, in Searchlight, Nevada, USA. His parents were Inez Orena and Harry V. Reid. He also had three brothers.

As a young adult, Harry Reid attended the College of Southern Utah, and he later attended the Utah State University. He later graduated from college with a degree in political science. Afterward, he went on the attend the George Washing University Law School, where he earned his law degree.

After graduating from law school, Harry Reid went on to work as a city attorney in Henderson, Nevada. After working here for some time, he went on to run for a political position as the lieutenant governor of Nevada. Harry Reid won the election and was inaugurated to the post in 1970. He stayed in this position until his term was up in 1974.

After finishing up his term as lieutenant governor, Harry Reid ran for the positions of United States Senator and later for the governor, but he lost both elections. He then went on to work as the chairman of the Nevada Gaming Commission (from 1977 to 1981), which allowed him to take a break from politics for about half a decade.

In the early 1980’s, Harry Reid returned to the world of politics and ran an election to become a member of the United States House of Representatives. He was elected to the House in 1982. He stayed there for several years before running for the Senate in 1986, a seat which he also won. While he worked as a member of the Senate, he did what he could to improve the state of Nevada. He was mostly concerned with the economic state of the area, especially that of Las Vegas. With his reforms, the economy of the city and state boomed. He worked on this, and other similar projects in Nevada and for the United States in general, throughout the 1990’s.

After Obama was elected to the presidency in 2008, Harry Reid worked within the Senate to pass many of President Obama’s legislation, including the Affordable Care Act (also known as Obamacare). For the next several years, Reid continued to support many of President Obama’s and the Democrats legislation. He also continued to work on reforming the economy of Las Vegas and Nevada as a whole.

In 2014, the Republicans took the majority of the Senate again, making Reid the Senate minority leader again. He worked in this position for a short time before retiring from the Senate (he did not seek another re-election term) in 2017. Harry Reid was led succeeded by Chuck Schumer as the Senate, minority leader. Even after his retirement, he remained vocal in politics, especially in his disgust of the election of Trump in 2016-17.