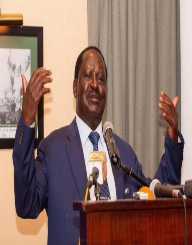 Raila Odinga is a Kenyan statesman and politician who is best known for serving as prime minister from 2008 to 2013.

Raila Odinga was born in Maseno, Nyanza Province in the British Kenya Colony on 7 January 1945. His parents were Mary Ajuma Odinga and JaramogiOginga Odinga. Odinga’s father Jaramogi was the first vice-president of Kenya. Odinga was educated in Kisumu Union Primary School and Maranda High School. He studied at the University of Leipzig in East Germany. He also studied in Magdeburg and East Berlin in East Germany. In 1970, he returned to Kenya with a master of science degree. Back in his native country, which had gained independence in 1963, Odinga founded his own company which manufactured the metal cylinders for holding gas and liquid petroleum.

Due to his father’s political prominence, it was almost a foregone conclusion that Odinga would become politically active. In 1982, he was arrested by the regime of Daniel Arap Moi. Odinga was linked to a failed coup and was placed under house arrest. It was largely believed he was only being punished because of his family links; his father had been an active opponent of Moi’s rule. However, a biography of Odinga published many years later claimed that he was in fact heavily involved in the attempted coup. Thousands had died in the coup attempt, and Odinga was imprisoned for six years without trial. While imprisoned his mother past away, but he was not informed of the event until many months after the event.

His release in 1988 was short lived as his calls for the implementation of multiparty elections saw him returned to prison the same year. After a year more in prison, Odinga was released, but he continued to campaign for human rights and multiparty elections to be legalized. This again led to his detention along with other activists. In 1991 after his release he left Kenya for Oslo in Norway under threat of assassination. He returned to Kenya in 1992 to join his father’s Forum for the Restoration of Democracy movement. In the first multiparty elections in Kenya of the Moi presidency, Odinga was elected to parliament. Following his father’s death in 1994, Odinga attempted to secure the leadership of FORD but was defeated. He left and joined the National Development Party. Odinga stood for the party in the 1997 presidential elections where he finished third. Odinga then took the NDP into an alliance with Moi’s KANU party. This secured Odinga a position in Moi’s cabinet. Odinga then became secretary general of the New KANU party.

However, in 2002 Moi chose Uhuru Kenyatta as his successor and Odinga led a mass exodus of the party and formed the Rainbow Coalition which would join with other Kenyan opposition parties. This new opposition secured over two-thirds of the votes in the presidential election sweeping Mwai Kibaki to power. Odinga had been the chief campaigner for Kibaki, who was bedridden with injuries for most of the campaign. Once elected though Kibaki reneged on a deal to appoint Odinga Prime Minister and share cabinet positions evenly with his coalition partners. Kibaki instead attempted to consolidate presidential power in a new constitution. Odinga led the campaign against the new constitution which was defeated in all but one of Kenya’s provinces.

Odinga stood against Kibaki in the 2007 presidential election and was declared to have lost by two hundred and thirty thousand votes. Many declared the vote fraudulent, and there were calls from the UN for a recount. Odinga supporters began protests which descended into two months of violence. The UN eventually brokered a deal whereby Odinga would become Prime Minister, and Kibaki would retain the presidency. This made Odinga Kenya’s first prime minister since 1964 and only its second ever. The violence, however, had led to the deaths of over a thousand Kenyans.

Odinga stood again in the 2013 Kenyan presidential election. This time he faced two opponents under investigation from the International Criminal Court, Uhuru Kenyatta and William Ruto. Kenyatta and Ruto joined forces during the election and secured just over fifty percent of the votes making Kenyatta the president. Although the Kenyan Supreme Court acknowledged that the election had seen some invalid and spoilt ballots counted, it still threw out Odinga’s appeal against the results. Although he never secured the presidency, Odinga is seen by many as being responsible for the current devolved power of the presidency enshrined in the current constitution. Odinga worked with the African Union to mediate the disputed elections in Ivory Coast in 2011.

Odinga married Ida AnyangoOyoo in 1973. Together they have four children, Fidel, Rosemary, Raila, and Winnie. When he was younger, Odinga played soccer for Luo Union, his local team. Due to his work in petroleum containers, he is estimated to be worth over thirty million dollars.