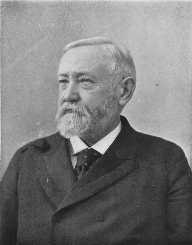 Benjamin Harrison is the 23rd president of the United States of American. He was the grandson of William Henry Harrison, the 9th president of United States of American. He is a very determined president that is always remembered for the economic legislation he put forward. After his education completion, he became an active member of the Republican Party. He once fought in the Civil War and marched on Atlanta with General Sherman. He was later promoted to Brigadier General and left the military service to resume his law practice. He was successful and held some senatorial position for six years before his nomination as the presidential candidate.

Benjamin Harrison was born on the 20th day of August 1833 in North Bend, Ohio, in the United States to John Scott Harrison and Elisabeth Harrison. His father is a member of the U.S. House and was the second born in the family of eight children. He got his early education in a room schoolhouse closer to his home. He attended the Farmer’s College in Cincinnati, Ohio, in 1847. Benjamin Harrison was transferred to Miami University, Oxford in Ohio, in 1850 and graduated in two years later. He studied law upon the completion of his college degree. Benjamin Harrison was an apprentice in the Cincinnati Law Office of Storer & Gwynne before moving to Indianapolis. He started practicing law and became a crier for the Federal Court in Indianapolis. He joined Republican Party after its formation in 1856 before joining the Army when the war broke out.

It was not surprising that Benjamin Harrison ventured into politics. He resumed his political career in 1865 after a little delay due to the civil war. In 1865, following his several unsuccessful efforts for an office, he was elected to the United States Senate. He so much pushed forward his party’s position for free education and pensions for blacks. Benjamin Harrison also opposes with his party the so much controversial Chinese Exclusion Act of 1882. He suffered a defeat in his bid for reelection but later came to limelight when he was nominated to run against President Grover Cleveland. He campaigned and won the electoral college against the President.

LIFE OF AS THE PRESIDENT

Sworn on the 4th day of March 1889, Benjamin Harrison encountered a lot of issues ranging from a civil service reform to an administration war pensions as well as the tariff regulations. His legislative branch was nicknamed The Billion Dollar Congress due to his spending policies. He signed the Sherman Antitrust Act into law to curtail monopolies around. He also faced the problems of currency reform and economic equity. Benjamin Harrison addressed the currency and economic equity problems with a compromise bill. However, the currency was not reformed. The black could not enjoy the much civil rights as black Americans during that period because he failed to enact the Acts as regards to that. However, a good relationship has not been established with the Native Americans. The federal troops have clashed with Sioux and killed women, men, and children. The Government also keep on with his aggressive policies of assimilation. He expanded the country to include Washington, Montana, Idaho, Wyoming and the Dakotas.

Benjamin Harrison also tried to annex Hawaii towards the end of his presidency, but this remains open. However, the economy worsened towards the election period. The deficit was experienced by the country, and this weakened the Republican party. A lot of people thus chose the populist party to the Republican party. Cleveland was renominated against Benjamin. Benjamin didn’t have campaign but chose to stay with his wife who eventually died. He lost the election to President Harrison. He moved to California and taught at Stanford University.

As a senator, Benjamin Harrison supported many issues which he later championed. He championed pensions for Civil War Veterans, Statehood for Dakota, tariff reforms, civil service reforms among others. He also pushed forward the landmark Sherman Antitrust Act and pushed forward for the rights of the African-Americans.

Benjamin Harrison married Caroline Scott, a teacher, on the 20th day of October 1853. The couple gave birth to two children. However, she died in October 1892 as the first lady of the country. Later on 6th of April 1896, he married a widow who is a former secretary to his wife. He had a daughter with her. Altogether, he fathered three children – Mary Scott Harrison, Benjamin Harrison, and Elisabeth Harrison. He died on the 13th day of March 1901 in Indianapolis, Indiana. He died at the age of 67 after being down with pneumonia. After his death, he was interred in Crown Hill Cemetary in Indianapolis.