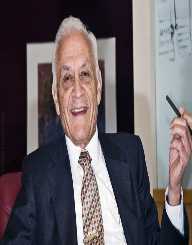 Amar Gopal Bose was born on November 2, 1929, in Philadelphia. He was born in a Bengali Hindu family, to a Bengali father and American mother. His father fled Bengali in 1920 because he was an Indian freedom revolutionary. He was at one time imprisoned for his political activity and upon being released, decided to flee to the United States. Bose’s mother Charlotte was a schoolteacher. She was very interested in Vedanta and Hindu philosophy.
Bose showed his interest and skills in electronics at an early age. When he was thirteen, he first showed his entrepreneurial skills. Once the World War II broke out, he enlisted his friends as co-workers in a home business. The boys were repairing model trains and home radios, which provided some addition to his family’s budget.

Bose attended the Abington Senior High School in Abington, Pennsylvania, and after graduating enrolled at the Massachusetts Institute of Technology. He graduated with a Bachelor of Science in Electrical Engineering. During his study time, Bose also spent a year in Eindhoven, Netherlands working at the research lab at NV Philips Electronics and later spent a year as a Fulbright research student in New Delhi, India. Bose went on to get a Ph.D. from MIT, writing his thesis on non-linear systems.

After acquiring his Ph.D., Bose was offered assistant professor position at the Massachusetts Institute of Technology. While he was working as a professor, Bose once bought a high-end stereo speaker. He was disappointed when the speakers failed to produce the sound quality he was looking for, and this inspired the extensive speaker technology research. Bose focused his research on the weaknesses in the high-end speaker's systems available at the time. His research later led Bose to invent a stereo loudspeaker which produced the sound field characteristic to the listening space of the audience in a concert hall. Bose focused on the psychoacoustics, which later became the hallmark of his company’s products.

In 1964, Bose acquired the initial capital to fund his company from angel investors, including his fellow MIT professor Y. W. Lee. Bose’s inventions were awarded significant patents in two fields, which until this day continue to be an important value of the Bose Corporation. Bose’s company produces products for cars, home, and professional audio. As of 2016, the company employed 11,700 people. Bose also continued to research acoustics. The company was never taken public, which meant that he could continue long-term, at times risky research.

In the 1980s, Bose developed a new product. He replaced the automotive shock absorbers with electromagnetic ones. His invention radically improved the performance of automotive suspension systems.

Despite the success of his company, Bose remained a professor at MIT until 2001. During his teaching career, he earned several awards, including Baker Teaching Award. In his honor, MIT established The Bose Award for Excellence in Teaching and later the Junior Bose Award. Bose donated the majority of the company’s non-voting shares to MIT in 2011, with an agreement that these shares will never be sold. MIT does not participate in operations or governance of the Bose Corporation.

In 2007, Amar Bose was listed by the Forbes magazine as the 271st richest man in the world. At the time, his net worth was $ 1.8 billion. He was not a billionaire by 2009 but returned to the list in 2011 with a net worth of $1.0 billion.
Bose’s first marriage was to a woman he met during his time in Delhi, India- Prema Bose. The couple later divorced but had two children together. Despite his mother’s passion or religion, Bose did not practice any religious rituals. He did meditate for a short while every day. His son Vanu is the founder and CEO of a software-defined radio technology company. Amar Bose died in 2013 at his home in Wayland, Massachusetts.

Bose is the honorary member of Audio Engineering Society and in 2008 was inducted into the National Inventors Hall of Fame. In 2010, Bose received the IEEE/RSE Wolfson James Clerk Maxwell Award for his contributions to consumer electronics and sound reproduction, as well as industrial leadership and engineering education.