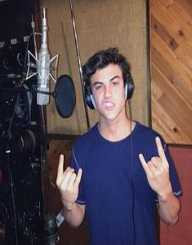 Grayson Bailey Dolan was born on December 16th, 1999. He is a young superstar that has won the hearts of many through the different videos that he posts over the internet. Dolan has a twin brother named Ethan. Together, they have YouTube channels where they post their videos and share them globally. Being a socialite, Dolan boasts of having over 1.8 million followers on Twitter. Throughout Dolan’s professional career as a YouTuber, he has won the Choice Web Star and the People’s Choice YouTuber Award. He shared both awards with his twin brother.

The two twins Dolan and Ethan never had a plan that they would instigate a thriving career over the internet. Cameron, their elder sister, introduced them to Vine. Their first channel on Vine was soon up, and it was titled ‘Formidable Force.’ Through this channel, Dolan and Ethan uploaded some entertaining family videos. Their first video to be uploaded featured a young kid trying to steal mayonnaise.

With time the two brothers set up different channels on Vine to match their growing audience. Dolan also liked up with other notable individuals on Vine such as Amanda Cerny, Jack Dail, and Jack Paul. To boost their popularity, there are eminent persons that have made guest appearances in their channels. Some of them include Chloe Colaluca, Kian Lawley, Meredith Mickelson, Jake Paul and Cameron Dallas.

Alongside his brother, Dolan rose to fame following the popularity of one of their YouTube channel called ‘Dolan Twins.’ This channel has over 2.4 million followers. Most of the videos uploaded to this channel are hilarious not forgetting the fact that they are family oriented. ‘#DolanTwinsTuesday’ is the hashtag that they use in uploading their vlogs to their channel every Tuesday.

Aside from being active over the internet, Grayson Dolan is also an energetic individual out there. He actively engages in sports such as skateboarding and wrestling. Dolan won a wrestling tournament that was held at Madison Square Garden. In the dating game, he is also known for hanging around with some ladies. He recently dated Chloe Alison and Hailey. Rumor has it that he is currently in a relationship with Sofia Olivera who is also a Viner.