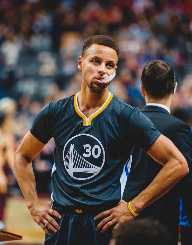 American basketball player Warden Stephen Curry was born in Ohio on March 14, 1988. His father Dell Curry is a former NBA player. He learned a lot about the fundamentals of basketball from his father. His mother Sonya was a former volleyball star. She was the one who taught young Stephen about discipline and training.

Curry grew up in Charlotte, North Carolina. The family moved to Ohio when his father was playing for Toronto Raptors. At the time Stephen played for the Queensway Christian College’s boys’ basketball team and lead them to an undefeated season. After the family returned to Charlotte, Stephen went to the local Christian school and was named all-conference, all-state and lead his team to three conferences and three state playoffs. He wanted to play for his father’s team the Hokies but ultimately chose to enroll at Davidson College.

In his first year, Stephen Curry was the second highest scoring freshman in the country. He finished his year with 113 three-pointers. At the end of his freshman year in 2007, he was named the freshman of the year. He was also selected to play for FIBA U19 World Championships and helped team USA to win a silver medal.

In 2009, Stephen Curry was selected by the Golden State Warriors. His contract was worth $12.7 million over four years. His finished second in the run for Rookie of the Year. In 2011 season, Curry received the NBA Sportsmanship Award. He averaged 18.6 points, 5.8 assists, and 1.5 steals. In May 2011 he had surgery on his ankle to repair torn ligaments. He came back for the 2011-12 campaign, but sprained his ankle and only appeared on 26 games of the regular season.

Before the 2012-13 season, Curry agreed to a contract extension with the Warriors. Although this move was considered risky for the Warriors, due to Curry’s injury history, he turned out to be extremely valued. On February 27, 2013, Curry scored a career high of 54 points and set the franchise record for three-pointers made in the game (11). The Warriors finished the year with 47 wins, but they lost in the second round of playoffs.

The following season Warriors hired Steve Kerr as their new head coach. Kerr made a lot of changes in the strategy of the team, allowing Curry more freedom to shoot. This season Curry became the first player in the history of the league to register six three-pointer and six steals in one game.

The Warriors were at No.1 in the Western Conference. During playoffs, Curry injured his ankle. He came back to the game in the 4th game of the rounds. The next day he was voted the MVP by unanimous vote - the first time in the NBA history.

Curry has played for the FIBA U19 team, and also played in the senior squad in 2010 FIBA World Championships where the USA won gold. He also helped the national team to win the 2014 World Cup. Curry withdrew from the 2016 Olympics due to his ankle and knee problems.

He is an outspoken Christian and participates in various charities. In 2012, he started donating three mosquito nets to the UN Foundation Nothing But Nets for every three-pointer he made. After winning his MVP award in 2015, Stephen Curry gave his prize-vehicle Kia Sorento to the East Oakland Youth Development Center.