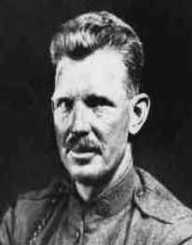 Alvin Cullum York was born on December 13th, 1887. Also known as Sergeant York, he hails as one of the most honored U.S Army soldiers of World War I. He received a Medal of Honor after leading an attack and captured a total of 132 German soldiers.

After WWI, York received a number of honors from other allied countries including Italy, Montenegro, and France.

Alvin Cullum York was born on December 13th, 1887. He grew up in Tennessee and worked as a logger and also on construction crews. He was the third born of eleven siblings to William Uria York and Mary Elizabeth. His father worked as a blacksmith.

When his father died, York helped his mother raise his siblings. He occasionally engaged in fistfights and also drank heavily. In 1914, he converted and vowed to change, dedicating his time to the Church of Christ in Christian Union. He led the singing in church and even referred to as the "Singing Elder."

In 1917, 29-year-old Alvin C. York's earlier application was approved and drafted into the U.S Army. He then handed himself a post at Camp Gordon, Georgia. He worked closely with both his company and battalion commander.

The 1918 attack near Hill 223 handed York his first Medal of Honor. Alongside four other non-commissioned officers, his group successfully overpowered the Germans, capturing German soldiers and preventing a counter-attack.

His actions saw him promoted to the rank of Sergeant and awarded the Distinguished Service Cross. He later concluded on an investigation and his previous award upgraded to the Medal of Honor.

After World War I

In 1920, Alvin C. York founded the Alvin C. York Foundation with the aim of increasing educational opportunities for his region. The foundation's management also constituted prominent members of the government.

Alvin C. York had his name placed on seven buildings in Tennessee. In 1928, the Sergeant had York Avenue of Manhattan, New York City named after him. Robert Penn Warren, an award-winning author, featured York for characters in his novels.

Alvin C. York married Grace. Together they had eight children, two daughters, and six sons. Almost all of their children had names of American historical figures.

Alvin C. York died on September 2nd, 1964. He battled sickness almost throughout his life with pneumonia and stroke.