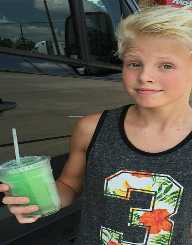 The 21st century has been the century for Internet sensations, and teen stars. Carson Lueders is another name in the list of hundreds of teen celebrities with a huge fan following on various social media channels on the internet. Carson James is a singer, songwriter and a guitarist with over 5 million subscribers on his YouTube channel where he started posting covers of popular songs.

After featuring cover songs on youtube, Carson’s popularity skyrocketed, and he started having duets with popular stars, and then finely released his singles. Some people have even called him the new Justin Bieber, although his fans think he has his unique persona.

Carson James was born on July 26, 2001. His sun sign is Leo, and his birthplace is Spokane, Washington. Carson James is the son of John Lueders& Diane Lueders who has been very supportive of his career choice. He has two siblings – a brother named Jackson, and a sister named Olivia.

Carson James started posting videos on YouTube at a very early age. He was featured on a local radio station at only six years of age and then began covering songs of stars such as Miley Cyrus, Justin Bieber, and Keith Urban. His numbers soon began to grow, after being praised by Keith Urban on his channel.

Carson James earned over 1 million fans in less than three years and has over 5 million currently. He has a good voice, and his blonde hair adds to his charm. A large group of his fans, come from the younger teenage group. Carson James got more publicity when he appeared and became a finalist at Spokane’s got talent, after which he appeared at America’s got talent and then started in his career of making music.

Carson James also got some support from famous stars such as Keith Urban, who praised him for his cover of the song, for you. In 2013, Carson James released his first original song titled Beautiful. This song was well-received by the fans, and his popularity rose even further.

In 2014, he released All day. He began singing in the pop genre, and Radio Disney released his video titled Pop in 2016. Although he does seem like a young Justin Bieber, he brings a lot of his personality into his videos.

Carson James has taken up music professionally, but he is also very interested in motocross racing. Carson James is also a water sports lover and enjoys them very much.

After his meteoric rise to stardom, Carson James does not get to enjoy as much as in public openly, but whenever he gets time, he loves to play basketball or ride his bike. Carson James is also associated with several philanthropic and charity works and has a special place in his heart for kids with disabilities.

Carson James family has been extremely supportive of his career choice, and because of his work commitments, he has mainly been homeschooled.He is currently dating another online celebrity, Jordyn Jones.