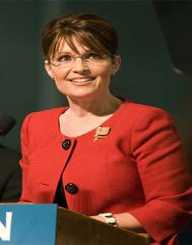 Sarah Palin was born on February 11, 1964. She is an American politician and author. She served as the ninth Governor of Alaska for three years, that is, from 2006 to 2009. In the 2008 United States Presidential election she ran for the office of the Vice President with the Republican ticket. She was the first Republican woman to be nominated for the seat of the Vice President. She is hardworking and determined in everything that she does. Back in school, she was known as a very active lady that she even came third in the Miss Alaska pageant.

Sarah Palin was born on February 11, 1964, as Sarah Louise Heath in Sandpoint, Idaho, United States of America. She was born to Sarah Heath who was a school secretary and Charles Heath who was a science teacher and a track and field coach. She was brought up alongside three siblings namely Heather, Chuck Jr. and Molly. Her family relocated a lot, but they finally settled in Wasilla in 1972. She attended Wasilla High School where she was very active in sports.

Sarah Palin was the head of the Fellowship of Christian Athletes. She was also a member of the Girls’ basketball and cross country teams. In 1984, she won the Miss Wasilla beauty pageant but finished third in the Miss Alaska pageant. She joined the University of Hawaii at Hilo but later on transferred to Hawaii Pacific University in Honolulu. She then transferred from Hawaii Pacific University to North Idaho College. In 1987, she graduated from the University of Idaho in Moscow with a Bachelor’s Degree in Communications in the area of journalism.

Sarah Palin was employed as a sportscaster for KTVA- TV and KTUU- TV in Anchorage after she graduated. She later on became a sports reporter for the ‘Mat-Su Valley Frontiersman’.  In 1988, she married Todd Palin and she then became involved in his commercial fishing business. In 1992, she entered politics as a Republican when she earned a seat in the Wasilla City Council. In 1996, she ran for mayor of Wasilla where she succeeded and defeated the incumbent mayor John Stein. In 1999, she won another term as the mayor of Wasilla. In 2002, she stepped down from the seat of mayor after her term of service was over. In the same year she ran for the Republican nomination for lieutenant governor of Alaska but she did not win.

In 2006, Sarah Palin ran for the office of the governor of Alaska which she won and became the state’s first female governor. Her governance was appreciated by the citizens of Alaska as it focused on education and public safety. She did not support abortion but she emphasized the need for sex education in schools. Sarah attracted Republican presidential aspirant John McCain who chose her to be his running mate in the 2008 presidential election. John McCain lost to Barack Obama and Joe Biden and so Sarah resumed her duties as the governor of Alaska.

In 2009, she resigned for the governor’s position. In the same year she released her memoir titled ‘Going Rogue: An American Life’. The following year she released her second book titled ‘America by Heart’. She associates with the Tea Party Movement where she is an unofficial spokesperson. She delivered a keynote address at the first National Tea Party Convention in 2010.

In 2008, Sarah Palin was awarded the Alumni Achievement Award by the Alumni Association of North Idaho College.

In 1988, Sarah Palin got married to Todd Palin with whom she has five children. She has a net worth of $12 million.