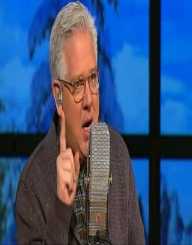 Glenn Beck is a passionate television and radio host, and a leading voice in television programs such as ‘FOX News Television’ and ‘Glenn Beck’ program which attracted a large crowd of fans. He is also the producer of ‘For the Record’ on The Blaze which he currently airs.

Beck was born in Mountlake Terrace, Washington on February 10, 1964, to Mara Clara and William Beck. His parents were of German descent who migrated to the United States in the 19th Century.

Additionally, the family relocated to Mount Vernon, Washington where they operated a City Bakery. While at Mount Vernon, he was raised a Roman Catholic and enrolled in Immaculate Conception Catholic School. From an early age, Beck showed interest in Radio and loved imitating the voices he heard, recording and replaying them on a handheld recorder.

At the age of 13, Glenn contested for a guest DJ on a local AM station which he won. Two years later, he started working on weekends at the studios in a new Seattle FM station. During this time, his parents divorced forcing him and his older sister to move to Sumner Washington where they stayed with their mother. While there, he attended Jesuit School in Puyallup.
An unfortunate condition befell their family when his mother died unexpectedly at the age of 41. Beck assumes his mother’s death was suicidal, but the investigator speculated that she drowned because her body was found floating in water as well as her male companions.

After his mother’s death, Glenn was forced to move back to his father’s home in Bellingham, Washington where he joined Sehome High School and graduated in June 1982.

He faced with yet another tragedy of his brother’s suicide, but immediately after his graduation, he moved to Provo, where he worked for a radio station, KAYAK. However, after six months he moved to Washington D.C where he took a job with the WPGC as a radio personality. At the age of 21, he was commanding a salary of $70,000.

In 1983, Glenn worked in a KZFM radio station in Texas. Two years later, he started working with the WRKA radio in Louisville where he worked as a DJ for morning-drive. He also had a four-hour weekday show called ‘Captain Beck and the A-Team’ which entailed jokes, pranks, and imitations.

However, he left abruptly in 1987 after a disagreement with the station’s management.
A few months later, he was hired by Phoenix Top-40 station, Y-95 and co-hosted a ‘Morning Zoo’ program alongside Tim Hattrick. During his stay at the position, he created a rivalry with KZZP radio station and its morning host Bruce Kelly, by telephoning his wife on air and mocking her miscarriage.

Unfortunately, Glenn resigned in 1989, and accepted another job at KRBE in Houston known as Power 104, but was fired a year later due to poor ratings.
Beck then earned himself a job at the city’s leading Top-40 station in Baltimore known as B104. During his tenure at the position, he partnered with Pat Gray in a morning show, but they got fired.

In 1992, the two moved to a top-40 radio station KC101 in New Haven. While working in the program, they mocked a Chinese-American caller with a comic segment on air; a move that provoked protests by activists groups. Gray then left the show and moved to Salt Lake City while Glenn continued to co-host alongside Vinnie Penn, but his contract ended at the end of 1999.

Consequently, he joined WFLA (AM) station in Tampa, where he aired his first program, ‘The Glenn Beck Program’ which took the first slot within a year. Later in January 2002, the Premiere Radio Networks broadcasted the show on 47 new stations and was transmitted from WPHT, a new flagship station located in Philadelphia.

Notably, the Premiere Radio Networks extended his contract on November 5, 2007. His show, on the other hand, kept on progressing and by May 2008, it was ranked 4th in the country reaching over six and a half million listeners.

Glenn made his first appearance on television in January 2006, where he hosted CNN’s Headline nightly news. At the end of his stay on the show, he had the second most significant audience. Remarkably, in 2008, he won the Marconi Award for the Network Syndicated Personality of the year.

Additionally, Glen left the CNN Headline News in October 2008 and joined the Fox News Channel where he hosted ‘Glenn Beck’ on weekend version.
In 2009, he also had a regular Friday segment on the program ‘the O’ Reilly Factor’ titled ‘At Your Beck and Call’ which drew more viewers than the competing shows. However, this high rating drew negative criticism from ‘The Washington Post’s’ and TV analysts such as Andrew Tyndall.On June 30, 2011, he aired his last show on ‘Fox News’ and interviewed with GBTV, (currently known as The Blaze TV), an internet television network, immediately after the show.

In his first year of operation, Glenn earned an estimation of $ 27 million which was later upgraded to $40 million when the subscription increased to 300,000 by The Wall Street Journal. By September 2012, the Dish Network started carrying The Blaze TV making it available to over 90 television providers.

Remarkably, Beck has written non-fiction, fiction and children’s picture books which were rated as #1 in 2010 on The New York Times Best Seller list. Apart from his television appearances, Beck is an imaginative performer with a mix of comedy and inspirational talks.

Beck produced a film titled ‘The Christmas Sweater: A Return to Redemption’ in December 2009. A month later, he teamed with Bill O’Reilly and made several tours in a stage show ‘The Bold and Fresh Tour 2010’ broadcasted in theatres across the country.

Remarkably, in 2008, he received a Marconi Award as the personality of the year.
In 2013, he won the Gene Burns Memorial Award for Freedom of Speech by the Talkers Magazine and a Tribeca Disruptive Innovation Award. Notably, in 2011, he earned a Defender of Israel Award by the Zionist Organization of America.

Beck married Claire in 1983, and the couple had two daughters. However, they divorced in 1994 due to Beck’s substance abuse. Later in 1999, he married his second wife Tania, and the couple had two children.
In 2003, he participated in rallies in support of Iraq war and on July 4, 2007, he hosted the 2007 Toyota Tundra ‘Stadium of Fire’, in Provo. Gleefully, in 2011, he founded a charity organization called ‘Mercury One’ which entailed selling of clothes to benefit charity.