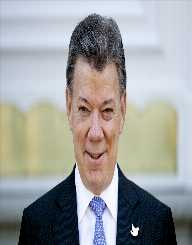 Juan Manuel Santos is the current president of Colombia. He is also the 32nd president and only recipient of the Noble Peace Prize 2016.

Juan Manuel Santos was born on August 10, 1951 in Bogotá, Columbia. He was born into a highly political family. He had four brothers named Enrique, Felipe, Luis, and Fernando. His great-uncle had been president from 1938 to 1942, and his cousin had served as vice president from 2002 to 2010. The family had also been the founders of the Colombian newspaper El Tiempoin which the family owned for over 50 years.

Juan Manuel Santos' school career started with attending Colegio San Carlos, a private secondary school in his hometown. He attended the school for most of his early school career until 1967, when he enlisted in the Colombian Navy and transferred to Admiral Padilla Navel Cadet School where he graduated in 1969. In 1971, he left the Navy and moved to the United States where he attended university in at the University of Kansas.

In 1973, Juan Manuel Santos graduated with a Bachelor’s Degree in Economics and Business Administration. Afterwards, he continued with school and studied at the London School of Economics Colombia where he received a Master of Science in Economic Development. Following graduation, he enrolled at the John F. Kennedy School of Government at Harvard University. He graduated with a Masters of Public Administration in 1981, and then retired from his academic career.

In 1992, Juan Manuel Santos was appointed the president of the VII United Nations Conference on Trade and Development. Santos was named Minister of Defense in July 2006, after founding the Social National Unity Part. As Minister of Defense, he was able to shed light on a false positives scandal that related to the executions of guerillas that had been carried out by the military.

Juan Manuel Santos was named president on June 20th, 2010 after several rounds of voting. Later that year he was officially inaugurated in the midst of a diplomatic crisis involving Venezuela. This issue was quickly resolved with Santos as president.

Juan Manuel Santos married Silvia Amaya Londono, a well-known director, and TV presenter, but the couple separated after three years. They had no children together, and it was rumored that the couple had a rocky marriage.

He then married a second time. This time to a woman named Maria Clemencia Rodriguez Munera (1987) who worked as an industrial designer. The couple had three healthy children: Martin, Maria Antonia, and Esteban.

Little is known about what Juan Manuel Santos does in his free time. However, it is understood that the politician owns his restaurant named the “Fat Santos Burger,” suggesting that he might have an entrepreneurial side or a love of food.