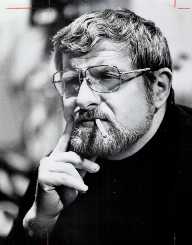 Paddy Chayefsky was an American playwright, screenwriter, and author who has won a number of awards for his works.

He married his wife Susan Sackler on February 1949 who bore him a son named Daniel in 1955. Chayefsky died from cancer at the age of 58 on August 1, 1981. On his funeral, Bob Fosse did a tap dance performance as part of his deal with the deceased author should he die first and if not, Chayefsky was to deliver Fosse’s eulogy in the event of his death.

Paddy Chayefsky was born as Sidney Aaron “Paddy” Chayefsky on January 29, 1923, in The Bronx, New York City. His parents were Gussie and Harry Chayefsky, both Russian immigrants of Jewish descent who came to live in New York from Moscow in 1907. For his high school education, he was enrolled at DeWitt Clinton High School and was the school’s editor-in-chief of the literary magazine. Upon graduating high school, he proceeded to pursue a degree in accounting at the City College of New York which he attained in 1943 then furthered his studies by taking up languages at Fordham University.


The Birth of “Paddy” at the Military

At the height of World War II, Paddy Chayefsky enlisted in the military where he served under the 104th Infantry Division near Aachen, Germany. His nickname Paddy was given to him by an officer when he used the excuse to attend mass to escape kitchen duty.

While rendering service in the military, he was injured from a land mine that led him to admit to the Army Hospital for recuperation. He wrote the musical comedy No T.O. for Love while he was recovering which was produced by the Special Services Unit in 1945 and went on tour for the European Army bases for two years.

The Pursuance of a Writing Career

Upon his military discharge, Paddy Chayefsky received a Purple Heart for his service. He then returned to work at Regal Press, his uncle’s print shop.

His writing career kicked off during the late 1940s where he started working for Robert Q. Lewis’ radio script. He entered the realm of television when he began working on Manhunt and Danger, but it was his work on Marty in 1953 that won him his first Academy Award.

While working at his uncle’s print shop, he picked up a lot of traits and information which were later used for his works on As Young as You Feel in 1951 and Printer’s Measure in 1953. He made his Broadway debut as a playwright on his 1956 work Middle of the Night followed by The Tenth Man in 1959 that made him a nominee for the Tony Awards’ Best Play. His last work on Broadway was The Passion of Josef D. He then turned to television writing instead.

Paddy Chayefsky was responsible for the screenplay of 1971 hit The Hospital which earned him an Oscar award followed up by his work on the Network in 1976 which also won him an Academy Award for Best Screenplay.

In 1979, he published his first novel entitled the Altered States which was later adapted into a film. He wrote the screenplay under the pseudonym Sidney Aaron instead of his real name as a result of clashing with the film’s director.

Paddy Chayefsky is credited in history as the only screenwriter who won three Oscar Awards for Best Screenplay without the aid of a co-writer.