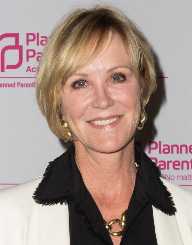 American television actress Joanna Kerns was born on February 12, 1953, in San Francisco, California, United States of America. Her birth name was Joanne Crussie DeVarona. She hailed from a humble background. Her father David Thomas DeVarona worked as an agent in an insurance company. Her mother Martha Louise worked for an apparel company as a store manager. She had three siblings, one older brother and sister each and one younger brother. Her older sister Donna de Varona was a distinguished champion swimmer. She had won two gold medals in the 1964 Olympics. Sibling rivalry made her compete with her older sister. Joanna tried her hand at swimming but soon realized that it was not her forte. Therefore, she switched over to gymnastics.

In 1968, she participated in the Olympic trial of the gymnastics events for her country. Joanna was ranked 14th out of 28. However, a critical knee injury nipped her aspirations to become an Olympics gymnast in the bud. As a result, she failed to replicate the success of her older sister. The injury cost her a wishful gymnastics career. Heartbroken, Joanna turned to dance. She found solace in dancing and went on to earn a degree in dance from the University of California, Los Angeles (UCLA).

Joanna began her acting career by working in television commercials. Her acting career picked up after her marriage with producer Richard Kerns. Initially, she had to be content with a few guest appearances in films. The films include 'Laverne & Shirley', 'Starsky and Hutch', 'Hill Street Blues', 'Three's Company' and 'Charlie's Angels'. She landed the lead role in the 1983 CBS series ‘The Four Seasons’. The sitcom, an adaptation of the 1981 film of the same name, did not elicit good reviews from the critics. Hence, the channel took it off air only after one season. However, Joanna’s portrayal of the lead character Pat Devon proved her potential as a dependable actor.

In 1984, she successfully auditioned for a new TV series called ‘Growing Pains’. She played the role of a working mother named Maggie Seaver. Maggie's character in the series was reeling with exhaustion. Joanna played the part to perfection. Her great friend Alan Thicke played the role of her psychologist husband. The series hit the jackpot. As a result, it was on air for seven long years. The instant fame she received catapulted her to television stardom.

After the conclusion of ‘Growing Pains’ in 1992, Joanna continued to pursue her acting career diligently. She acted in several television movies post-1992. She also reprised her role as Maggie Seaver in the television film ‘Growing Pains Movie’ (2000) and ‘Growing Pains: Return of the Seavers’ (2004).

WORK AS A DIRECTOR

She turned to direction after the stupendous success of her recurrent television series ‘Growing Pains’. As a director, she successfully directed several episodes of popular television shows such as 'Ghost Whisperer', 'Switched at Birth', 'Private Practice', 'Pretty Little Liars', 'Dawson's Creek', 'Grey's Anatomy' and many more.

Joanna met producer Richard Kerns in 1974 while shooting for a car commercial. They married two years later on December 11, 1976. The couple together has a daughter. They later divorced in 1985. She tied the nuptial knot for the second time with Marc Appleton on September 30, 1994.

Joanna is a cancer survivor. In December 2016, she opted for a double mastectomy after being diagnosed with breast cancer in November of that year. Her brave decision on the face of some great risk of radiation and fear of degeneration bore fruit. She was declared pathologically free from cancer after the successful double mastectomy.