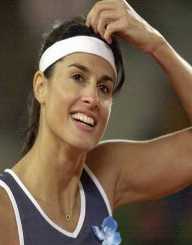 Gabriela Beatriz Sabatini, a former professional Tennis player and one of the major players of her generation, was born on 16 May 1970, in Buenos Aires, Argentina to parents Osvaldo and Beatriz Garofalo Sabatini. Her father worked as an executive in General Motors. Her elder brother raised her.

During the childhood days of Gabriela Sabatini, her father and the elder brother used to play a lot of tennis which resulted in her developing a fascination towards the sport. When she was only six years old, Sabatini used to practice tennis all by herself by hitting the ball against the wall. Thus, her father noticed a keen interest and future potential in her.

Apprehending her natural talent and passion for the game, her father arranged for professional coaching to develop her skill in the sport. By the age of 10, Gabriela Sabatini proved to be a naturally-skilled tennis player. She was ranked No.1 in Argentina in the 12-and-under division. In her growing years, Gabriela continued to improve and held onto her no.1 ranking.

Gabriela Sabatini burst onto the international platform in 1983. At the age of 13, she won the Orange Bowl in Miami, Florida and became the youngest player to do so. In the following year, in 1984, she won seven of the eight major junior international tournaments including the French Open Girls’ Singles and was ranked No.1 junior player.

In 1985, at the age of 15 years and three weeks, she became one of the youngest-ever player to reach the semi-final of the French Open, an event that is listed amongst the premier grand-slam tournaments of the tennis world. She eventually lost to Chris Evert. She went on to win her first major tournament in 1985 itself when she won the Tokyo Open later in that year.

In 1988, Gabriela Sabatini reached her first Grand Slam Singles Final at the U.S. open. She lost to Steffi Graf of Germany, who won all the four Grand Slam titles of that year. Selected to represent Argentina in the 1988 Summer Olympics held in Seoul, South Korea, Sabatini also got the honor to carry Argentina’s national flag in the opening ceremony march-past. She won the Silver Medal in the Women’s Singles competition losing again to Steffi Graf, the gold medalist. She teamed up with Steffi Graf in the 1988 Wimbledon Tournament and won the doubles crown. Sabatini also won the year-ending WTA Tour championship in the same year.

Gabriela’s first Grand Slam Singles title came in the year 1990. In the U.S. Open of 1990, Gabriela Sabatini ultimately conquered Steffi Graf, one of her constant professional rivals by then, and went on to win the title for the first time. She again beat Steffi Graf in the semi-final of the 1990 WTA Tour championship only to be beaten by the eventual winner Monica Seles in a thrilling unprecedented five-setter of the tournament history. In 1991 she won five tournaments in the first half of the year and came close to attaining No.1 ranking in the professional circuit but narrowly missed the opportunity to both Steffi Graf and Monica Seles.

The year 1992 was a mixed bag. In 1992, Gabriela Sabatini won five tournaments but failed to achieve any success in the Grand Slam events. Though there was an intense on-court rivalry between Steffi Graf and Sabatini in this year also, it was Steffi, who always got the better of her. Amid a continuous losing streak throughout 1993, 1994 and 1995, she won the 1994 WTA Tour Championship beating Lindsay Davenport of America.

Gabriela Sabatini played her last professional singles match on 14 October 1996 and lost to Jennifer Capriati. She retired from the professional circuit in the same year after playing her last doubles match in a semi-final in Zurich. Sabatini has a collection of 27 singles and 14 doubles title. She reached her topmost rank at No. 3 in 1989 but was denied any further progress in her career by the intense competition displayed by rivals Steffi Graf and Monica Seles.

In the 1980s, Gabriela Sabatini initiated a perfume business, and after collaborating with the German perfume company, Muelhens started introducing a line of fragrances. She introduced her signature scent in 1989.

1. In 2001, Gabriela Sabatini won the ‘Diamond Konex Award’ as the Most Relevant Sportsman of the decade in Argentina.

2. In 2006, she was inducted into the ‘International Tennis Hall of Fame.’ She also won IOC Women and Sport Trophy in the same year.

Gabriela Sabatini is a spinster. The woman who walked away from the game when she was in her prime time is very shy and introvert by nature. At the age of 43, she once admitted to deliberately losing matches in her teens only to avoid public speaking and interviews. She is well guarded about her private life and is considered very close to her nieces and also her brother’s family.

She is actively involved in socially relevant campaigns for UNESCO, UNICEF, and the Special Olympics. She is working appreciably to help the poor and downtrodden, especially for the children.