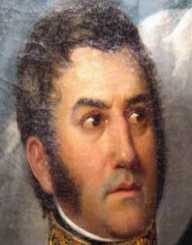 Jose Francesco de San Martin was a revered military leader, hailed for aiding the dissidents in the independence wars of South America.

Jose Francesco de San Martin Matorras was born on February 25, 1778. His birthplace was Cervatos de la Cueza, Yapeyu in the province of Corrientes, Argentina. He was the fifth born child of the governor of Yapeyu. He was born of parents Juan de San Martin and Gregoria Matorras. His parents relocated to Buenos Aires in 1781. His father was recalled back to Spain in 1785. The entire family moved to Spain.

San Martin attended a prestigious school in Madrid from 1785 to 1789. At the age of 11, in 1789, he left Real Seminario de Nobles. San Martin joined the cadet school in the town of Murcia.

For the next 20 years, Jose Francesco de San Martin fought in numerous battles in Europe and North Africa. In 1791, he fought against the Moors in the Mediterranean. He then fought against the British in 1798. He was captured and released as a prisoner of war. In 1801, San Martin was at the battlefield against the Portuguese. In 1808, the French leader Napoleon Bonaparte invaded Spain. The French occupied Spain and imprisoned the Spanish king.

San Martin fought against the French to liberate the Spanish monarch. In 1811, the French were driven out, and Spain regained its sovereignty. Due to his gallant military input, he quickly rose up the ranks to be Adjutant-General. San Martin then requested to be discharged from the Spanish army. His request was granted.

Jose Francesco de San Martin then went to England. During his stay in London, he became acquainted with other South American born soldiers. They told him of the independence struggles in South America. After prevailing on him to support the rebels in the Americas, San Martin set sail for Buenos Aires in 1812. San Martin arrived in the same year. He was the senior most Spanish military officer to decamp to the rebel ranks.

Jose Francesco de San Martin's return to Argentina after 27 years was not wholly welcomed. The revolution leaders suspected his motives. No one understood why a high ranking Spanish military officer and son of their former governor would join the rebels. The rebel leaders gave him a junior rank in the movement. Despite that, San Martin managed to lead his unit to the first ever rebel victory against the Spanish in any battle.

His unit won the battle at San Lorenzo against a better trained Spanish army. His achievement was noticed, and he gained command of the rebel army. He replaced General Belgrano in 1814. San Martin put up a formidable army. He trained and drilled the rebels using the modern warfare techniques he learned in Europe. Eventually, the rebels liberated Argentina on July 9, 1816. San Martin was made the governor of Cuyo province.

The province of Cuyo was overlooked by Chile. Jose Francesco de San Martin feared the Spanish army in the high Andes Mountains could easily attack the lower Cuyo province. He decided to liberate Chile. The plan was simple but tedious. After three years of preparing his army of Argentines and rebel Chileans, he attacked. His army crossed the Andes Mountains in January of 1817. In February 1817, San Martin’s army liberated Santiago de Chile. Chile became an independent republic. He declined an offer to be the leader of Chile in favor of his longtime friend General O'Higgins.

In January 1818, Peru sent an army expedition into Chile. The Chilean army was badly defeated in Cancharrayada in March 1818. The Chilean leader O'Higgins suffered battle wounds and retreated. In April that year, the combined troops of Argentina and Chile defeated the Peruvian army. Chile was liberated.

The successes in Argentina and Chile boosted the morale of the two armies. The next target was Peru. Jose Francesco de San Martin and his allies decided to invade from the Pacific coast. The Englishman General Cochrane was tasked with forming a competent navy. Cochrane managed to create a navy fleet with the help of the US and Britain. San Martin and his fleet entered Peru’s capital Lima on August 20, 1820. Peru proclaimed its independence from Spain.

Jose Francesco de San Martin was married to Maria de Los Remedios and had a daughter named Mercedes. He died on August 17, 1850, at Boulogne-sur-Mer in France aged 72.

San Martin was a strict disciplinarian. He was meticulously organized. These two qualities made him a mercurial military genius. From nothing, he built a formidable revolution that swept out a better equipped Spanish army from the South Americas.