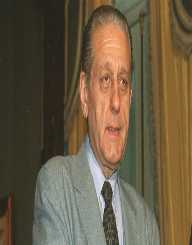 Rene Geronimo Favaloro was a prominent Argentine cardiac surgeon. Born on July 12, 1923, he is known as the first to perform a documented coronary artery bypass surgery. He was also the first Argentine to perform a successful heart transplant.

Rene Geronimo Favaloro was born on July 12, 1923, in La Plata, Argentina to Juan B. Favaloro and Ida Y. Raffaelli. His father was a carpenter, and his mother a dressmaker and both were Sicilian immigrants. Growing up, Favaloro got fascinated with football and was an ardent supporter of the Gimnasia y Esgrima La Plata, which was a famous football club. However, picking inspiration from his uncle who was a physician,  Rene Geronimo Favaloro also aspired to be one. Favaloro had his education at the Colegio Nacional de la Plata in 1936 where he received a bachelor degree in 1941. He was then drafted in the Argentine Army to serve during the Second World War II. He reached the rank of Lieutenant before being discharged in 1946.

After Rene Geronimo Favaloro was discharged from the Army, he enrolled at the National University of La Plata’s School of Medicine. Three years into his studies, he did his medical residency at the Hospital Policlinico San Martin. The hospital was a busy one that received most of the complicated from Buenos Aires province. That was when he first came into contact with patients. Monitoring works of professor Jose Maria Mainetti and Federico E.B Christmann, he picked up methods of simplicity and standardization which he applied in his cardiovascular surgeries. In 1949, he graduated with a medical degree.

Rene Geronimo Favaloro applied to as a medical auxiliary after his graduation; however, as he was required to enrol in the Peronist Party before having the position, he rescinded his decision. Within that time, the resident doctor in the town Jacinto Arauz in La Pampa Province had died, so he went there to replace him.

While there, Rene Geronimo Favaloro was joined by his brother Juan Jose who he worked with to improve on the health standard of their area of jurisdiction. They engaged and trained other health professionals, teachers and the general public in other to sustain quality health care in the area. He also brought in other interventions to the clinic including an operating room, X-ray and equipped the laboratory.

While working as a surgeon, Dr. Favaloro gained interest in the field of cardiovascular and thoracic surgery. This interest took him to the Cleveland Clinic with the assist of Professor Mainetti. He had a second taught of leaving the rural place and his patience to the United States. However, Rene Geronimo Favaloro came to the conclusion that, equipping himself with such knowledge would have a greater impact on the country at large.

While there, he started as a resident doctor before joining the surgical team to work under Donald B. Effler, head of cardiovascular surgery. Favaloro also worked under F. Mason Sones Jr, head of the Angiography Laboratory and also known as the father of coronary angiography and also William L. Proudfit, head of the Department of Cardiology. His first area of work was with vascular and congenital diseases and moved to other areas as he progressed. His first bypass surgery was in 1967 on a 51-year-old woman.

Rene Geronimo Favaloro used the procedure of bypassing the diseased part of the coronary artery to be able to ensure blood flow by using the saphenous vein while the heart has been stopped. This technique became the practical standard from that period. Within a year, about 171 bypass surgery had been carried out in the Cleveland Clinic. With this success, he published the volume, Surgical Treatment of Coronary Arteriosclerosis in 1970.

In 1971, Rene Geronimo Favaloro returned to Argentina with a core dream of setting up a center of excellence to the status of the Cleveland Clinic, which will also include research and educational facilities. He was able to bring this vision to fruition in 1975 when he established the Fundacion Rene Geronimo Favaloro in collaboration with others.

He then trained about 450 resident doctors from Argentina and the other sub-region. To enhance the standard of healthcare delivery in the country especially in his are of studies, Favaloro with his foundation organized seminars, courses, and conferences for health professionals. To achieve his goals, he also set up the Basic Investigation Laboratory, which he solely financed and supported by the Research and Teaching Department of the Fundación Favaloro.

It later became the Institute for Research in Basic Sciences of the University Institute of Biomedical Sciences and metamorphosed to the Universidad Favaloro in August 1998. To keep his dreams intact and make his vision of achieving a center likewise to the Cleveland Clinic, he instituted the nonprofitFavaloro Foundation Institute of Cardiology and Cardiovascular Surgery in 1992 in Buenos Aires. The institute was specialized in cardiovascular surgery, heart, lung, cardiopulmonary, Kidney, liver and bone marrow transplant among several others. Even after his death, the Favaloro foundation has become one of the largest cardiology institutes in the Americas.

Rene Geronimo Favaloro got depressed in the year 2000 when the economy of Argentina got to its knees. His foundation became highly indebted by the government, as he was owed $18 million by state-owned hospitals. He sent several petitions to the government, which was never responded to neither was the director of PAMI public medical insurance agency, Horacio Rodriquez Larreta ready to settle that debt. With this depression and other national issues, Rene Geronimo Favaloro committed suicide by shooting himself in the heart on July 29, 2000.

After his death, his letter to the Argentine president, Fernando de la Rua surfaced. In the said letter Falavoro expressed his dissatisfaction with how he has turned into a beggar in his own country and the difficulties he had to go through to find money to meet the medical needs of the poor. Hence requested money to sustain his Foundation but the letters were never replied.

Rene Geronimo Favaloro gained several recognitions and honors including, membership of 26 societies and 43 honorary degrees. He won the John Scott Prize in 1979, the Teacher Prize of Argentinian Medicine, 1986; the Distinguished Alumnus Award from the Cleveland Clinic Foundation, 1987, The Gairdner Foundation International Award1987 and the Golden Plate Award of the American Academy of Achievement in 1993.

Rene Geronimo Favaloro works led to several publications and also wrote about history with two such publication being about Jose de San Martin. Some of his over 300 publications includeSurgical Treatment of Coronary Arteriosclerosis (1970), Recuerdos de un médico rural ("Memories of a rural doctor," 1980) and ¿Conoce usted a San Martín? ("Do you know San Martín?", 1986). Others include La Memoria de Guayaquil ("The memory of Guayaquil" 1991), De La Pampa a Los Estados Unidos ("From La Pampa to the United States," 1993) and Don Pedro y la Educación ("Don Pedro and education," 1994)