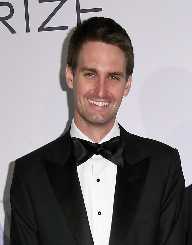 Spiegel attended the Crossroads School for Arts and Sciences in Santa Monica. After graduation, he went on to study at Stanford University. Spiegel also took design classes at the Otis College of Art and Design during his time at high school. Before entering Stanford, Spiegel attended the Art Center College of Design in Pasadena and had a sales internship at Red Bull.

While at Stanford, Spiegel was interning for a biomedical company as a careers instructor in South Africa. He also worked at Intuit on the TxtWeb project.

One of Evan Spiegel’s first projects was Future Freshman- an online software to help in the management of college admissions by counselors, parents and high school students. Despite the excellent start, the project ended soon after. At the time, Spiegel was working with his fellow student Bobby Murphy and also met Reggie Brown. The three collaborated on a new project, which eventually became a major success.

Brown and Spiegel came up with an idea for an app with disappearing pictures. They decided to start a prototype and also involved Murphy in the process. The project was first named Picaboo and received a lot of negative criticism from their classmates. In 2011, the three launched the application under the name Snapchat. The small project soon evolved into an image and multimedia messaging application.

The following year, Evan Spiegel left Stanford to focus entirely on his project. By May 2012, 25 images were sent every second using Snapchat. In November that year, there were 20 million photos shared via Snapchat every day. Spiegel and his team continued to evolve their product, adding new features to it, including My Story and the ability to communicate via video chat. By 2016, Snapchat hit 10 billion daily video views.

Spiegel and Murphy hold over 70% of the voting power in the company, and after the release of IPO for Snap Inc., they own 45% of the stock. Spiegel and Murphy pledged to donate 13,000,000 shares of Class A common stock for arts, education and youth non-profit organizations.

In 2015, it was reported that Evan Spiegel is dating the supermodel Miranda Kerr. They met at a Louis Vuitton dinner in New York in 2014. The couple engaged in 2016. Before dating Miranda Kerr, Spiegel reportedly dated pop singer Taylor Swift.

Spiegel was ranked No. 854 on the Forbes 400 with $4 billion net worth. He is a member of the Berggruen Institute 21st Century Council. In 2013, Snapchat won the Crunchies Best Mobile Application award. He was also awarded the 2015 Eddy Award in recognition of his role in the development of LA County economy and creation of well-paying jobs for its residents.