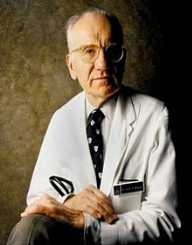 Edward Butts Lewis was born on the 20 May 1918 in Wilkes-Barre, Pennsylvania. His parents were Laur Mary, and Edwards Butts Lewis and his father was a jeweller.

During his high school years, Edward B. Lewis developed an early interest in the life cycle of fruit flies and bought Drosophila cultures so that he could study them.

After having won a flute scholarship, he studied music at Bucknell University. He then changed to the University of Minnesota, obtaining a B.A. degree (1939). In 1942 he was awarded a PhD. in genetics from California Institute of Technology. He also was awarded an M.A. in meteorology (1943).

During World War II Edward B. Lewis was a captain in the U.S. Army Air Force (1942-1945) where he worked as an oceanographer and meteorologist in the South Pacific.

After the war, Edward B. Lewis spent a year as a fellow at Cambridge University in the UK (1947-1948) on a Rockefeller Foundation grant, before returning to the California Institute of Technology in 1956.

During the 1950s Edward B. Lewis turned his attention to how the human body reacts to radiation. His research included studying the medical records the survivors of the atomic bombs dropped on Hiroshima and Nagasaki in 1945. His report stated that there is no risk-free dose of radiation. In a paper entitled Leukemia and Ionizing Radiation, he drew parallels between radiation and the increase in leukemia. This report, presented to a Congressional committee in 1957 drew strong criticism from supporters of nuclear technology.

He was appointed the Thomas Hunt Morgan Professor of Biology at Caltech in 1966. During the 1975-1976 academic year, he was a guest professor at the Institute of Genetics, University of Copenhagen, Denmark

At Caltech, he continued his research into the fruit fly, and in 1995 he was awarded the Nobel Prize in Physiology and Medicine. He shared the prize Christiane Nusslein-Volhard and Eric F. Wieschaus for their research on genetic control of early embryonic development.

Edward B. Lewis retired from Caltech in 1988 and remained as a professor emeritus.

Edward B. Lewis was married to Pamela Harrah in 1946. They had three sons: Hugh, Keith, and Glenn.

Edward B. Lewis was one of the scientists who deciphered the genetic code. His research into the fruit fly demonstrated how genes control embryonic development.

He won many awards, medals, and honors. Societies he was made a member of include the National Academy of Sciences, the Genetics Society of America, the American Philosophical Society. He also belonged to the Royal Society in the UK and the Genetical Society of Great Britain. He won the Thomas Hunt Morgan Medal (1983), the Gairdner Foundation International award (1987), the Wolf Foundation prize in medicine (1989), the National Medal of Science (1990) and the Louisa Gross Horwitz Prize (1992). He also held some honorary degrees.

Edward B. Lewis is famous for the four-winged Drosophila mutants.