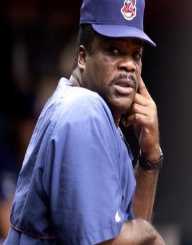 As a teenager, Eddie Murray attended Locke High School. It was while there that he began playing baseball. He was in part encouraged to do this by his brothers, all of which who also played baseball. Murray and all of his brothers would later go on to play baseball professionally.

Eddie Murray was scouted by the Baltimore Orioles in 1973. He was chosen in the third round of the draft. However, it wasn’t until 1977 that he had his debut on the baseball field with the team. In his first year, he earned a batting average of .283, which was fairly good for a new player. Within the first decade of playing, he has already won awards and was given the nickname “Steady Eddie” by his teammates.

In the 1980’s, Eddie Murray became more famous. In 1983, he hit over 30 home runs in that year’s season. For most of this decade, he continued to play for the Orioles. However, in 1988, he was traded and became a member of the Los Angeles Dodgers. He then played with the Dodgers for the remainder of the decade.

In 1995, he joined the Cleveland Indians, but he soon rejoined the Baltimore Orioles in 1996. The next year, be played for the Anaheim Angels and the Los Angeles Dodgers, before finally returning to the Orioles again in 1998, this time as a coach.

Even with all of the dizzying trades, Eddie Murray was still considered to be a dependable and consistent player. This was more because of his skills on the field with all of the teams that he played for, instead of because of how he played with any certain team. Over the course of his career playing baseball, he had over 500 home runs.

In 1998, Eddie Murray began his coaching career by becoming a bench coach for the Orioles. He did this for a while before being promoted to the position of the first-base coach. He stayed with the Orioles until 2002, when he became the hitting coach for the Cleveland Indians. He did this until 2005. In 2006, he started working as the hitting coach for the Los Angeles Dodgers. He stayed with this team until he was fired in 2007. This was his last baseball-related career.

During his career as a professional baseball player, Eddie Murray earned numerous awards. Some of his most impressive awards and accomplishments related to his baseball career are listed below.

Eddie Murray holds the records for most RBI for switch hitters, most sacrifice flies, and most assists by a first baseman. Eddie Murray was inducted into the Baseball Hall of Fame in 2003. There is a statue of Murray at Oriole Park. This was put in place in 2012.

Eddie Murray is married to Janet Murray. This couple has two children together.