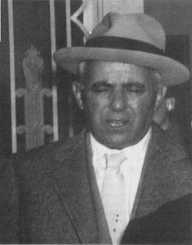 Anthony "Tough Tony" Anastasio was an Italian criminal who served as a racketeer for the Gambino family. The criminal group controlled Brooklyn dockyards for close to 30 years. Alongside his brother, they controlled longshoremen's union. His influence, however, declined drastically after the death of his brother.

While Antony worked in Brooklyn, his brother became a hit man. He faced once faced murder charges but was later acquitted. His nickname the ‘The Executioner' tells it all.

His influence the streets of Brooklyn rose rapidly in 1932. Antonio gained control of International Longshoremen's Association where he eventually took over as the vice president of the organization.

He took over six ILA chapters in 1937, sealing the ownership of the facility. Over the next coming years, he grew his wealth through kickbacks from rival ship companies and stolen merchandise.

His extravagant lifestyle explained the enormous amount of wealth he possessed. His brother's murder charges majorly contributed Antony's rise to power. He used intimidation as his way of ruling,

To get his point clear, Antonio mentioned his brother. As a way of sabotaging foreign shipping, he suavely damaged ships. He demonstrated how one could rule through fear and perception.

Working With The FBI

After the assassination of his brother in a barber shop in New York City, his influence and power diminished. Carlo Gambino took charge of the crime family. He, however, maintained his position as a dock.

The anger of losing power and the fear for his life prompted him to turn to the FBI. The FBI recorded a statement where Antonio states that his brother deserved to die to pay for killing too many people.

Shortly after joining the FBI as an informant, Tough Tony died after a short illness at a Hospital in Brooklyn on 1st March 1963. The doctors confirmed the cause of his death to be a heart attack.

His son in law took over his duties at longshoremen's union. The Gambino crime family continued to transfer the life of crime from one generation to another.

Antonio later married Rose Lacqua; the two went on to sire one daughter together. Their daughter, Marion married Anthony Scotto, a mobster. Antonio also had a nephew called Albert Anastasio.