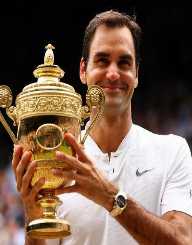 Roger Federer is best known for his skills as a professional tennis player. This Swiss athlete has more going in his life than just tennis.

Roger Federer was born on August 8, 1981, in Basel, Switzerland. His father Robert is Swiss while his mother Lynette is South African. The young Federer always took an interest in sports such as soccer, basketball, and tennis.

His focus narrowed to tennis after ranking in the Top 3 junior players in his country. By the time he was 14, tennis was his life with tournaments a few times a month as well as practice and conditioning for hours each week.

Roger Federer gained national recognition in the tennis world after earning the title of Switzerland's national junior champion. He joined the International Tennis Federation (ITF) junior tennis circuit in 1996. By 1998, Federer's recognition expanded worldwide with wins in the junior Wimbledon and the Orange Bowl.

Roger Federer was the ITF World Junior Tennis champion of 1998 before he decided to play professionally at the age of 17.

Roger Federer had many wins and losses at the beginning of his professional career. However, it made him a stronger player and prepared him for his future success in the sport. In 2001, he defeated Pete Sampras in the fourth round of Wimbledon, signaling the transition of one professional's career ending and the other professional's career on the rise.

As Roger Federer ranked higher in the Association of Tennis Professional's (ATP) ranking, he continued to break records and stand out. In 2003, for example, he was a finalist in nine tournaments and won seven of them. One of those wins included his first Wimbledon. Federer was a force to be reckoned with as he became the top tennis player in the world from 2004 through 2007.

By 2008, Roger Federer was still winning games, but not at the same level as the years before. Even though he was always one of the top tennis players in the world, his ATP ranking was starting to drop.

In 2009, Roger Federer rebounded with his showing in the finals of all four Grand Slams. It was the year that he won Wimbledon again as well as winning his first French Open. That made him one of seven tennis athletes who completed a career Grand Slam.

Slowly, Federer's career as the top tennis player was slowing down. He still won tournaments defeating other top-ranked players, but he struggled to get to the finals of many prestigious tournaments. In 2012, he won a silver medal in tennis singles, but he lost to Andy Murray whom Roger Federer defeated in Wimbledon that same year.

In 2009, Roger Federer married Miroslava Vavrinec, also a tennis player. Together they have twin daughters Charlene and Myla. They also have two sons, Lenny and Leo. He stays active in his humanitarian work

Roger Federer is recognized for his humanitarian work as well as his tennis abilities. In 2003, he established the Roger Federer Foundation to help children become more empowered with early learning such as preschool and quality education.

While it primarily focuses on children in the southern portion of Africa, the foundation also services children in his home country of Switzerland.  He received the Arthur Ashe Humanitarian of the Year Award in 2006.