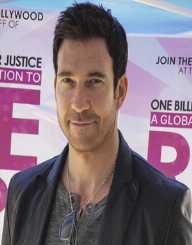 Dylan McDermott is an American actor born on October 26th, 1961. He is famous for his role in The Practice portrayed as Bobby Donnell. In this drama series, the character he plays, Bobby Donnell is a law firm head and lawyer. The role earned him a Primetime Emmy Award in 1999. The talented actor also starred in the hit series Hostages. McDermott attended Fordham University where he studied acting. Since 2012 to 2013, he featured in Horror Story alongside actress Jessica Lange.

Dylan McDermott was born on October 26th, 1961. His place of birth is in Waterbury, Connecticut in the United States. He is the son of Richard McDermott and his wife Diane and has a small sister called Robin. At the time of his birth, his mother was only 15. His father, on the other hand, was 17 years old. In 1967, his parents divorced. As a result, he went to live with his maternal grandmother Avis Marino along with his mother and his small sister.

Diane later lived with John Sponza, and sadly she passed away in February 1967. Five years old Dylan McDermott and his sister continued staying with their grandmother. He also began visiting his father and went to movies together. The playwright Eve Ensler the third wife of his father later adopted Dylan McDermott when he was 15. Even after she divorced his father, she remained close to Dylan McDermott.

Dylan McDermott attended Jesuit-run Fordham University where he studied acting. He also took lessons in Neighborhood Playhouse School of the Theatre situated in New York City. While there, he studied under Sanford Meisner.

In 1985, Dylan McDermott made his Broadway debut with his role in Biloxi Blues as Wykowski Selridge. This acting got the attention of John Irvin, the director of Hamburger Hill, a Vietnam drama film.

Dylan McDermott later acted minor roles in a few comedies in 1988. These include The Neon Empire, The Blue Iguana, and Into the Badlands. By then, his career had not stabilized. He would act a successful role and later a disappointing one.

In 1989, Dylan McDermott acted a successful role in Steel Magnolias followed by Flatliners. Subsequently, he acted a few other successful roles in Hardware, In the Line of Fire and Where Sleeping Dogs Lie.

However, in 1994, he acted a disappointing role in Miracle on 34th Street. Other such roles followed in, The Cowboy Way, Home for the Holidays and Three to Tango among others.

1997 marked a career turning point for Dylan McDermott. This was with his role in as Bobby Donnell in the series The Practice. In fact, this role earned him not only an Emmy nomination but also a Golden Globe award. The series also earned a Golden Globe and an Emmy in 1999 for the category of best drama series.

On November 1995, Dylan McDermott exchanged wedding vows with actress Shiva Rose. The couple was blessed with two daughters Charlotte and Colette before they later divorced in January 2009. In 2015, he got engaged to Maggie Q, his co-star in the film Stalker.

As a recovering alcoholic, Dylan McDermott has remained sober for 20 years