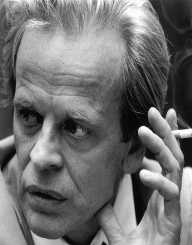 Klaus Kinski was born on October 18th, in 1926. He is a notable German actor. Some of the films that he is best remembered for include Aguirre – 1972, Fitzcarraldo– 1982, Cobra Verde – 1987 among others. During his entire acting career, Kinski featured in over one hundred films.

Growing up, Kinski’s family struggled greatly due to the effects of the great depression. As a result of this, they moved from place to place trying to find a better living. In 1931, for example, they moved to Berlin.

When Klaus Kinski was only 16, he was drafted into the army where he was to serve in the World War II. Unfortunately, he managed to serve for only two days as he was arrested by English soldiers. He spent the rest of the World War II period as a prisoner. Interestingly, it was while he was a prisoner that Kinski honed his acting skills. Around this period, he began performing in shows meant to entertain other prisoners.

After four years in captivity, Kinski made his return home in 1946. Sadly, on his arrival, he learnt that both his parents were killed during the war period.

After taking on some theatrical roles, Klaus Kinski's film debut came in 1948. He landed on a minor role in Morituri. Other smaller roles followed suit in films such as Decision Before Dawn (1951), A Time to Love and a Time to Die (1958), and The Counterfeit Traitor (1962).

Kinski was active during the 1960s and in the 1970s. Around this period, he featured in exploitation genre of films. One of his notable works around this time included DoctroZhivago in 1965.

After that, Kinski moved to Italy in the late 1960s. Here, he also continued with his acting career featuring in films such as For a Few Dollars More (1965), and The Great Silence (1968) among others.

Klaus Kinski also landed on an incredible opportunity to partner with Werner Herzog, a German director. It is through his work with Herzog that they came up with Aguirre: The Wrath of God in 1972. This brought Kinski to the limelight as he featured as the lead role for the film. Other films that the two worked together include Woyzeck (1978), Fitzcarraldo (1982) and the drama film Cobra Verde (1987).

Klaus Kinski was married thrice during his lifetime. His first marriage was to GislindeKühlbeck, a singer. Later, he wedded Ruth Brigitte Tocki before finally marrying Minhoi Geneviève Loanic. In all his three marriages, he has three children.

Klaus Kinski passed away on November 23rd, in 1991. His cause of death was that he suffered from a heart attack. He was only 65 years old at the time of his death.