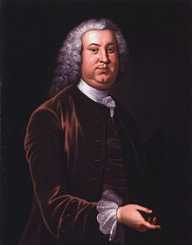 American colonist and politician William Randolph was born in Moreton Morrell, Warwickshire, England in November 1650. His parents were Richard Randolph and Elizabeth Ryland, and he was one of seven children. His father’s half-brother was Thomas Randolph, a poet and he had an uncle, Henry Randolph who had immigrated to Virginia. Both parents died when the family was living in Ireland in the late 1660s and early 1670s. Shortly afterward Randolph left for America.

William Randolph arrived in Virginia without means, but in a short time, he began to establish himself. He had had some training in carpentry and his uncle, Henry Randolph who had immigrated ten years previously, helped him find work. As he established himself as a contractor, he hired others to do the manual labor. And at the same time, as his business grew, he purchased land on Turkey Island and in time built a home. As he prospered, he bought up land further afield and subsequently became an important landowner and owner of slaves.

As his business expanded, William Randolph went into shipbuilding and trade, moving goods between the North American colonies and the UK.

William Randolph was actively involved in politics and served in various positions including justice of the peace, sheriff, and coroner. Between 1864 and 1698 he was the member of Henrico County in the House of Burgesses, Speaker of the House (1698) and Clerk of the House (1699-1702).

One of his closest friends was Colonel William Byrd who had arrived in Virginia in the 1660s. Byrd left a memoir, and the Randolph family are mentioned in the publication.