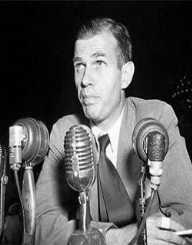 Alger Hiss was born on 11th November 1904, to Charles and Mary Hiss. He was born in Baltimore, Maryland, in the United States. He had four siblings, and his parents both had a long-term heritage in the Baltimore area.

Hiss’s father, Charles, worked for an importing company, and he did very well in business. Charles helped his brother-in-law, Albert Hughes, gain employment with the same company. Hughes did very well, but he fell into financial difficulty when a business deal went sour. Charles felt responsible, so he sold his stocks in the firm to pay out the debt Hughes had accumulated. As it was during the great financial panic in 1907, Charles was unable to find further employment. After succumbing to depression, he committed suicide.

Alger Hiss was only two years old when his father died. He didn’t find out the truth about his father’s death until he was old.

He studied at Baltimore City College, and then went to Johns Hopkins University. He was voted the “most popular student” by his classmates. He then went to Harvard Law School from which he graduated with his law degree.

Alger Hiss went to work for the government as an attorney. In 1933, he was working for the Justice Department. In 1934, he joined the Senate’s Nye Committee. This was a committee headed by Senator Gerald Nye, investigating possible profiteering by military contractors during World War I.

In 1936, Alger Hiss joined the State Department. He worked under Cordell Hull, as did his younger brother, Donald Hiss. Hiss was first an assistant to Assistant Secretary of State, Francis B. Sayre, and he was then special assistant to the Director of the Office of Far Eastern Affairs.

In 1939, he became assistant to Special Advisor to Cordell Hull on Far Eastern Affairs, Stanley Hornbeck. He held the position until 1944.

In 1944, Hiss took up the position of Director of the Office of Special Political Affairs. The role of the department was to make policy and plan for the post-war business environment. He also served in the capacity of executive secretary of the Dumbarton Oaks Conference which created the plans for what would become the United Nations.

In 1945, Alger Hiss was part of the U.S. delegation that attended the Yalta Conference. The conference was for Franklin D. Roosevelt, Winston Churchill, and Joseph Stalin, to confirm their alliance so they would not separately negotiate peace with the Nazis in Germany.

He participated in several meetings, as well as collating papers and documents for the conference.

In 1945, Hiss became the Director of the State Department’s Office of Special Political Affairs. In 1946, Hiss left government employment and joined the Carnegie Endowment for International Peace as the President.

In August 1948, Whittaker Chambers appeared before the House Committee on Un-American Activities (HUAC) and accused Alger Hiss of being a spy. Chambers was a former Communist Party member, and he was a senior editor at Time magazine.

Chambers said he knew Hiss to be a member of an underground organization of the United States Communist Party during the 1930s. Although initially the group was not explicitly focused on espionage, more intent on infiltrating the U.S. government, espionage soon moved on to the agenda.

Richard Nixon was a Congressman at the time, and he took advantage of the situation to start his political career, chasing Alger Hiss and other so-called members of the group.

In 1942, Chambers once again made the allegations against Hiss, this time to the FBI. In 1945, two others came forward also to allege Hiss was a spy. The first was Igor Gouzenko. He was a Ukrainian who had been stationed at the Soviet Embassy in Ottawa as a cipher clerk. When his three-year tour finished, he defected from the Soviet Union to Canada, and as part of his deal with the Canadian authorities, he gave information about a Soviet espionage network, which implicated Hiss.

The second person was Elizabeth Bentley, an American spy for the Soviet Union. She also passed information to the FBI implicating Hiss.

Alger Hiss appeared before HUAC in August 1948 to protest his innocence. Nixon was put in charge of a subcommittee to investigate and see whether it was Hiss or Chambers that was lying. After Chambers called Hiss a communist on the radio, Hiss launched a libel lawsuit against him. The battle between Chambers and Hiss continued, with Chambers producing evidence in the form of documents and camera film. The evidence would become known as “the pumpkin papers.”

Alger Hiss was charged with two counts of perjury. He could not be accused of espionage as the period of limitations had expired. He went to trial twice. The first trial finished with a hung jury on 7th July 1949.

The second trial finished on 21st January 1950. Chambers admitted he had committed perjury himself and had falsified records to make Hiss look guilty. Hiss was found guilty at the second trial, and he sentenced to five years in prison.

Alger Hiss didn’t serve his full sentence, and he was released in 1954. He had been disbarred as an attorney, so took up work as a salesman for a stationery company.

In 1957, he released a book, In the Court of Public Opinion. The book was about the case against him, and it challenged the prosecution’s case, particularly about some typewritten documents that had supposedly been done on his typewriter, but Hiss maintained they had been forged.

In 1975, an independent researcher, Stephen W. Salant, requested access to the pumpkin papers under the Freedom of Information Act. The U.S. Justice Department denied his request, so he sued them.

Other lawsuits were also relaunched the Justice Department, one of them by Alger Hiss, and eventually, the evidence was released.

Of the five rolls of “highly classified” film, one was blank, and two contained Navy Department documents that were unclassified. The other two films had photos of documents that had been part of the Hiss trials.

On 5th August 1975, Alger Hiss was readmitted to the Massachusetts bar, the only attorney to ever be readmitted after a major criminal conviction.

His wrote his autobiography, Recollections of a Life, which was released in 1988. He maintained his innocence right up until his death.

Alger Hiss married Priscilla Hobson, a primary school teacher, in 1929. She had a young son from a previous marriage. The couple separated in 1959, but they remained married until she died in 1984. In 1985, Hiss married Isabel Johnson.