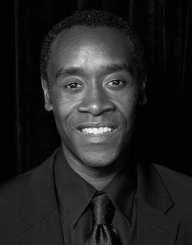 American actor Don Cheadle was born Donald Frank Cheadle on the 29 November 1964 to Bettye North and Donald Cheadle in Kansas City, Missouri. His father was a psychologist and his mother a school teacher. He was one of three children. He has a brother Colin and a sister Cindy.

Don Cheadle completed his high school education at East High School in Denver, Colorado. He then enrolled at the California Institute of the Arts where he obtained a BA in Fine Arts.

Early roles included acting in the television series Fame (1982), Colors (1988) and Hamburger Hill (1987) and Picket Fences (1993-1995). Don Cheadle won an Emmy nomination for his role in A Lesson Before Dying (1993), and his breakthrough role came in the film Devil in a Blue Dress (1995) which starred Denzel Washington and Jennifer Beal.

Don Cheadle has continued working in film and on television as an actor, director, writer, and producer.

Don Cheadle’s partner is Bridgid Coulter, and they have two children.

His humanitarian work was recognized in 2007 when Don Cheadle was awarded the BET Humanitarian Award for his work in Darfur and Rwanda. He is also a climate change activist.