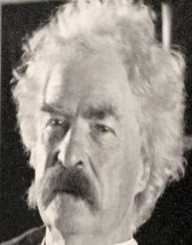 Samuel Langhorne Clemens better known as Mark Twain was a writer born in November 30th, 1835. He was born in Florida, Missouri in the United States of America. He is best remembered by his novels which included sequel of  The Adventures of Tom Sawyer was published in 1876 and the famous Adventures of Huckleberry Finn which is commonly known as ‘The Great American Novel’ which was released in 1885. Apart from writing, his line of career involved lecturing, entrepreneurship, and publishing. He brought humor to the world. He died on April 21st, 1910.

Mark Twain was born on November 30th, 1835 and given the birth name of Samuel Langhorne Clemens in Florida, United States. Born to John Marshall and Jane Lampton Clemens, he was the sixth child to the family. In 1839, his family had moved near Hannibal, Missouri which was a growing port city. This location was quite significant since it provided for the setting of his famous works in Tom Sawyer and Huckleberry Finn.

His father was a judge who built their residence in the year 1844 at an address of 206 Hill Street. During his childhood, he had some complicated ailments which made him be spending most of his life indoor due to the poor health. His father died when he was 12 years after being diagnosed with pneumonia.

When attained the age of nine years, Mark Twain got better and joined other children after which he was blessed to attend a private school. When he reached 13 years old, he dropped out of school

After Samuel left school, he became a printer’s apprentice. Two years elapsed, and Mark Twain worked for Orion Clemens, his brother, as a typesetter and article contributor for Orion’s newspaper. This was the turning point of his writing career as the job of an editorial assistant made him realize his talent. He had unsuccessfully worked as a miner.

After four years, Samuel went to St. Louis to work as riverboat pilot apprentice, and in 1858 Samuel was licensed as a riverboat pilot. It was in this navigation work that Samuel got his name Mark Twain which means navigation is safe. In 1861, the river trade became stagnant because of the Civil War. Twain's career took a twist when he worked for many newspaper agencies as a journalist such as Virginia City Territorial Enterprise.

Mark Twain inspired many through some of his books which were historically used as references. In 1869 Twain’s ‘The Innocents Abroad’ was published and in 1876, "The Adventures of Tom Sawyer" followed. In 1885 Twain wrote “The Adventures of Huckleberry Finn" in 1885.

On November 18th, 1865 Twain published his first book "The Celebrated Jumping Frog of Calaveras County" in New York Saturday Press which was a humorous book which brought him to fame as a celebrated satirical author.

Mark Twain married Olivia Langdon in 1870. They were blessed with four children but were unfortunate to lose one during infancy. Two others passed away during their twenties. Clara who was the surviving child died at the age of 88 and gave Twain a grand-daughter. Clemen’s direct descendants ended with Clara‘s daughter who never conceived.

Mark Twain was a critical Presbyterian and an anti-catholic having a keen eye for organized religion.

Twain is lauded as "greatest American humorist of his age." The home he spent his childhood is now a museum in Hannibal and opened to the public. In California, in May, the county of Calavaras holds the Calavaras County Fair and Jumping Frog Jubilee every third week of the month. There are also walking tours which are offered In New York that take the visitors to the places he visited.