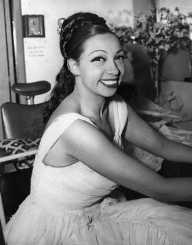 Josephine Baker was an outstanding American entertainer, a war hero, and civil rights leader. Born in 1906, she rose to stardom in France in the 1920s when American audiences weren’t interested in her talents because of her race. Baker garnered the favorable attention of artists and writers such as Picasso, Hemingway, and E. E. Cummings. She earned nicknames such as, “Creole Goddess” and “Black Pearl.” Years later, she spoke alongside Martin Luther King Jr. in the 1963 “March on Washington.”

Josephine Baker was born Freda Josephine McDonald on June 3, 1906, in St. Louis, Missouri. Eddie Carson, her father, was a vaudeville drummer who left his family shortly after Baker was born. Carrie McDonald, her mother, had given up her dreams of dancing to provide for her family. Baker’s mother remarried to Arthur Martin and had several more children. Unfortunately, he was unemployed most of the time. This meant that Baker began working as a maid and babysitter for white families at an early age. Her experiences were mediocre at best; she stated that abuse was common.

In 1919, when Josephine Baker was still in her early teens, she began her first tour. She toured the United States with The Jones Family Band and the Dixie Steppers. The troupes split, and Baker worked her way into a more significant role with the Dixie Steppers in their next review, Shuffle Along. Then, in 1924, she performed in Chocolate Dandies, a floor show at the Plantation Club in New York. It was a moderate success for her.

Josephine Baker moved to Paris, France in 1925. Paris was an integrated, cosmopolitan city, and she was welcomed. The mid-1920s is often referred to as the “Jazz Age.” This worked in her favor. Her first Parisian review was La Revue Nègre at the Thé?tre des Champs-Elysées. This marked a turning point in her career. It took the right audience at the right time. The most memorable part of her act was when she danced with her partner, Joe Alex, and wore only a feather skirt. The name of the dance was the Dance Sauvage.

Josephine Baker hit the height of her career when performing at the Folies Bergère. Of her performances, the one that garnered the most attention was La Folie du Jour. In it, she danced while wearing a skirt made of 16 bananas, and little else. By the end of this run, she became one of the best-paid and most popular performers in Europe. At the same time, she received over 1,200 marriage proposals. In the early 1930s, Baker expanded her talents. She took on singing roles in the movies Princess Tam-Tam and Zou-Zou.

In 1936, Baker hoped to enjoy the same success back home in America. She was set to star in the Ziegfield Follies, but the American press and public did not react kindly to a black woman in a title role. Crushed, Baker returned to France where she felt welcome.

Many years later, in 1973, she performed at Carnegie Hall in New York. She was overwhelmed by a standing ovation greeting and was said to have openly wept. Her concert was a great success.

In 1939, as Germany fought against France and other countries in Europe, Josephine Baker served her new country in three distinct ways. First, she was designated as an “honorable correspondent” by the Deuxieme Bureau, a French military organization. As part of her service, she smuggled messages and information in her sheet music. Second, she entertained the troops. Third, she worked as a sub-lieutenant in the Women’s AuxiliaryAir Force. Later, Baker was named a Chevalier of the Legion of Honor by the French government. She was also awarded the French Medal of the Resistance with Rosette.

In the 1950s, Josephine Baker often returned to America to participate in demonstrations against segregated concert venues and clubs. She was vocal in her support of boycotts against these establishments. In 1963, she was part of the “March on Washington,” and was one of the speakers, along with Martin Luther King Jr. Because of her voice and her efforts, the NAACP named May 20th “Josephine Baker Day.”

At the age of 13, Josephine Baker met and married Willie Wells in 1918. The marriage lasted only a few weeks. Then, in 1921, she married Willie Baker. While the marriage didn’t last, she kept the last name and used it for her professional career. In 1937, she married Jean Lion, a French industrialist. Through this marriage, she earned French citizenship. Ten years later, in 1947, she married French composer and orchestra leader Jo Bouillon. In her married life with Bouillon, she adopted 12 children from around the world. In 1973, after her divorce, she became involved with Robert Brady. She died at age 68 of a cerebral hemorrhage.