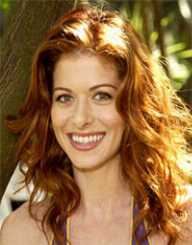 Debra Messing is a talented, award-winning actress well known for her role as Grace Adler in the NBC sitcom series, ‘Will and Grace.' She has also received acclaim for her work in ‘The Starter Wife,' ‘Smash’ and the comedy, ‘The Mysterious of Laura.' Additionally, she has voiced animated films such as, ‘Garfield,' and ‘Open Season.’

Debra Messing was born in the Brooklyn, New York, to parents, Sandra and Brian Messing on August 15, 1968. At the age of three, Messing and her family relocated to East Greenwich in Rhode Island. She enrolled at East Greenwich High School where during the junior years; she attended the British European Group Program which helped her in her acting career.

Later on, she joined Brandeis University where she graduated with a Bachelor of Arts in Theatre Arts and then attended the elite Graduate Acting Program at Tisch School of arts located in New York where she earned her master of Fine Arts.

Debra Messing made her career debut in her high school years when she acted and sang in school productions and starred in musicals such as ‘Annie’ and ‘Grease.’ In 1993, she earned her fame by playing in ‘Angeles in America: Perestroika’ followed by other appearances in the series, ‘NYPD’ from 1994-1995.

In the year 1995, she played the wife of an unfaithful Keanu Reeves in ‘A Walk in the Clouds.' Her performance in the film opened doors to her co-star role in the television sitcom, ‘Ned & Stacey’, a series that lasted two seasons from 1995-1997.

Debra Messing played two episodes of a romantic interest film, ‘Seinfeld.' She performed her first episode, ‘The Wait Out’ in 1996 and ‘The Yada Yada’ in 1997. During the same period, she starred in ‘McHale’s Navy’ and ‘Collected Series.'

In 1998, she starred on ABC’s science fiction television series titled, ‘Prey’ which she played the character of a bioanthropologist followed by her role in ‘Will & Grace’ show which became a huge success.

The People magazine named her among the 50 most beautiful people in the world in 2002 while the TV Guide picked her as the Best Dressed Woman in 2003. During this period, she had small roles in films such as ‘Hollywood Ending’ and the supernatural thriller, ‘The Mothman Prophecies.'

In 2004, Debra Messing appeared in a supporting role in, ‘Along Came Polly’ as an unfaithful bride followed by her lead role in ‘The Wedding Date’ in 2005. The same year, she played in the second season of ‘Project Runway’ of Bravo’s Reality show.

Later in 2007, she starred in the miniseries, ‘The Starter Wife’ and reprised her role as Molly Kagan in ‘The Starter wife’ ten episode series. In 2010, she starred in ‘Wright VS. Wrong’ an ABC comedy series followed by her musical role in ‘Smash’ from 2011-2012 which got cancelled after the second season. In July 2011, she earned her rank 22 as the funniest women on TV.

Debra Messing appeared in a drama film, ‘Like Sunday, Like Rain’ alongside Green Day and Billie Joe Armstrong in 2014, and played in ‘Outside Mullingar.' She also starred in a two-season series, ‘The Mysterious of Laura’ and played the character of Marjorie Houseman in ‘Dirty Dancing’ in May 2017.

Commendably, her role in ‘will and Grace’ show earned her five Crown Awards from voters during a celebrity hair site named ‘Super-hair’ and received a TV Guide Award as the actress of the year in 2001.

In 2002, Debra Messing had four nominations, for an Emmy Award, followed by a Golden Globe Award, a Teen Choice Award and a Screen Actors Guild Award, for her outstanding role in comedy series. Notably, she won a Satellite Award for her role in ‘Will & Grace’ as the Best Actress.

Debra Messing married Daniel Zelman in 1990 and lived together in Manhattan. The couple has a son named, ‘Roman Walker Zelman.' However, they divorced later on March 1, 2016. She also dated Will Chase from 2011 until October 2014.