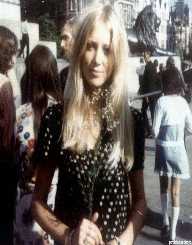 English photographer and 1960s model Pattie Boyd was born on the 17 March 1944 in Taunton, Somerset in England. Her parents were Colin Boyd and Diana Drysdale, and she had three siblings: Colin, Jenny, and Paula. In the late 1940s, the family moved to Kenya and remained there until 1953 when they returned to England.

Pattie Boyd was a pupil at the St Agnes and St Michael Convent School in East Grinstead and later enrolled at St Martha's Convent in Hadley Wood.

Moving to London in 1961 Pattie Boyd soon found work as a model. She worked with the top photographs of the day including David Bailey and appeared on the cover of Vogue magazine (1969).  She also did various television commercials. After being given a small part as a schoolgirl in the Beatles film, A Hard Day’s Night (1964) she met her future husband, George Harrison.

In 2005 Pattie Boyd held a photographic exhibition entitled Through the Eye of a Muse and another in 2011 entitled Yesterday and Today: The Beatles and Eric Clapton.