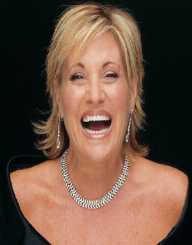 Born in Santa Monica, California in 1952, Lorna Luft is an acclaimed American singer, TV producer, actress, and Broadway Star. She is the second child of the legendary performer, Judy Garland, and Hollywood producer Sidney Luft. She has two siblings; her older half-sister Liza Minnelli and brother Joey Luft.

Her family life was unconventional. Her mother was famous for a very unpredictable and volatile personality characterized by depression, nervous breakdowns, alleged suicide attempts and a dependence on alcohol and prescription drugs.

As a child, Lorna Luft did not yet grasp the magnitude of her mother’s fame. Her normal was her parents throwing glamorous parties, going to Carnegie Hall, her parent’s famous friends in their house, attending concerts and being on movie sets. As she got older though, she realized her normal was not so normal after all.

Her parents divorced when she was twelve, and by that time, Lorna Luft had accepted that her mother was troubled. She did her best to take care of her, making sure she was eating well and taking her medicine as prescribed. Her mother, however, did not get better and Lorna went back to live with her father. Four years later, in 1969, her mother died of a drug overdose in London.

Lorna Luft, who was sixteen at the time, was so grief-stricken she ran away. She could not handle her mother’s death, and she turned to drugs and partying, the very thing that killed her mother, to dull her pain.

This had a negative impact on her studies at University High School in Los Angeles, barely graduating. The saving grace is that she joined the school choir which kept her grounded on her dream of making a career in performing arts.

Lorna Luft is having had an early exposure to show business through her parents, naturally wanted to follow in her mother’s footsteps. As such, she made her debut in 1963, at age 11. She featured, along with her siblings, on the short-lived CBS television series, T

he Judy Garland Show. She later appeared in her mother’s show, At Home at the Palace, held at the Palace Theatre on Broadway. As part of the production, together with her mother, they sang duets. This would become the last show she ever did with her mother as she died two years later.

In 1971 Lorna Lufthad her first Broadway debut in the musical ‘Promises, Promises’ an adaptation of the Billy Wilder film, The Apartment. This opened doors for her for more shows and in 1981; she featured in national Broadway tour of They’re Playing Our Song. A year later, she made her film debut playing Paulette in Grease 2, a romantic musical comedy.

Her career had officially taken off. She went on to play Peppermint Patty in Snoopy!!! The Musical, an Off-Broadway Production and starred in the play Extremities later that year. In 1985, Lorna Luft took a chance on television and played Nurse Libby Kegler on the final season of the TV series, ‘Trapper John, M.D..’ She also starred in ‘Murder, She Wrote.’

The 90s saw Lorna Luft back on Broadway working in both regional and national tours. She spent almost two years on the road playing Adelaide in the world tour productions of ‘Guys and Dolls.’ The mid-2000s, she toured in the US and the UK in the musical ‘White Christmas’.

By this time, Lorna Luft had solidified her reputation as one of the best stage actresses, and in 2009 she earned further acclaim when she toured the UK for the play ‘Pack of Lies.’ The play was critically acclaimed, and her performance as Helen Kroger was highly praised.

Although her TV performance never took, Lorna didn’t give it up. She continued to appear in TV shows and films like ‘Where the Boys are ‘84’, ‘Caroline in the City’ and the ‘Nanny.’

In memory of her mother, Lorna Luft recorded her debut CD called ‘Lorna Luft: Songs My Mother Taught Me’. Her husband Colin Freeman and Barry Manilow produced the album which was released in 2007. Currently, Lorna Luft has made a career as a singer, mostly singing songs that made her mother so famous but with her twist.

Lorna Luft has had a rocky relationship with her father ever since she released her memoir, Me & My Shadows: A Family Memoir, in 1998. He claimed that the book was not the correct depiction of their lives. The book was later adapted as a TV mini-series ‘Life with Judy Garland: Me and My Shadows’ and won an Emmy Award.

She has also had a tumultuous relationship with her famous half-sister, Liza Minnelli, although they were close for many years. When her substance abuse issues became intolerable, Lorna Luft checked herself to a rehab facility where Liza was at the time for the same issue. She says that even though their relationship is full of highs and lows, she and her sister will always find their way back to each other.

Lorna Luft is a mother of two children, Jesse and Vanessa. They are from her first marriage with musician Jake Hooker. She is presently married to Colin Freeman and has been since 1996. They have built a happy life together, and she splits her time between the UK and Los Angeles.

Lorna Luft has had a long battle with cancer. She first found a lump in her breast in December 2012 and went to her doctor. Three weeks later, she was diagnosed with breast cancer. She immediately started treatment opting for a lumpectomy.

In Mar 2018, Lorna Luft collapsed at a performance in London and her husband, who was at the concert, rushed her to the hospital. She later revealed at an interview that she had been diagnosed with a brain tumor. She has since had successful brain surgery at a Los Angeles hospital.