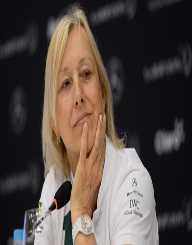 Martina Navratilova was born Martina Subertova in Prague, Czechoslovakia. Her mother was a gymnast, tennis player and ski instructor. When Navratilova was three years old, her parent’s divorced, but her mother remarried to Miroslav Navratil, who became her stepfather and first tennis coach. Her biological father also remarried but committed suicide when she was eight years old. Navratilova’s grandmother was a tennis player for the Czechoslovak Federation before World War II.

Navratilova began playing with a tennis ball when she was four years old, hitting it off a cement wall. She started to play regularly at seven years of age. Her first big performance was in 1972 when she won the Czechoslovakian national tennis championship. The following year, Navratilova made her international debut at the United States Lawn Tennis Association’s professional tour but went professional in 1975.

In 1975, Martina Navratilova played at the Australian Open, where she lost in the final to Evonne Goolagong. Her first French Open was also the same year, where she finished second. She lost the semifinals of US Open, but after this, went to the Immigration and Naturalization Service in New York City, wishing to defect from Communist Czechoslovakia. She received a green card a month later and became U.S. citizen in 1981.

In 1978, Martina Navratilova won her first major title at singles in Wimbledon. After this, she was ranked as World No. 1. In 1979, Navratilova faced her longtime rival Chris Evert at the Eastbourne finals, playing one of the highest scoring women’s professional matches. In 1981, Navratilova began training her fitness with Nancy Lieberman. This helped her to defeat Evert at the Australian Open and in 1982, she won the Wimbledon and French Open tournaments.

Martina Navratilova adopted Lieberman’s exercise plan and began using Yonex isometric graphite-fiberglass racquets, which allowed her to become the most dominant player in women’s tennis. In 1983, she lost the French Open title but won three other significant events. Her loss at French Open was her only singles defeat that year, establishing an 86-1 record- the best winning percentage for a post-1968 tennis player.

The following year, Navratilova won the French Open and reached a record of six wins at Wimbledon and the US Open. She became the first player in history to win majors on clay, grass and hard court in the same year.

During the 1980’s, Navratilova was ranked World No. 1 in doubles for several times. From 1982 until 1990, she reached Wimbledon final for nine consecutive times and reached US Open final five successive times. She made history, known as the best woman’s match of all times, playing against Chris Evert in 1985 French Open final.

In 1987, Martina Navratilova became only the third player of the US Open era to win the women’s singles, doubles and mixed doubles title at the same event. When Steffi Graf appeared on the tennis stage in 1987, Navratilova defeated her in the French Open final’s, but Graf’s consistent play throughout the year allowed her to obtain the World No. 1 ranking.

The following year, Graf beat Navratilova, winning all four major singles titles at Wimbledon. The next season, the two met at finals in Wimbledon and US Open, with Graf winning both events. Navratilova defeated Graf at the last game they played together in the 1991 US Open semifinals.

Navratilova’s final triumph at singles was in 1990 when she claimed a record ninth Wimbledon singles title. In 1994, Navratilova again reached Wimbledon finals but lost to Conchita Martinez. Soon after this event, she retired from full-time competition career, at the age of 37.

During the year 2000, Martina Navratilova mostly toured to play doubles events, but on rare occasions, also singles. She won the mixed doubles titles at Australian Open and Wimbledon in 2003. This win extended her overall major titles record to 58.

In 1981, after becoming a United States citizen, Navratilova came out as bisexual in an interview with New York Daily News sports reporter. Her girlfriend at the time was Nancy Lieberman. In 1984, she began dating Judy Nelson, a long-term relationship which lasted until 1991. In 2014, Navratilova got engaged to her longtime girlfriend Julia Lemigova, and they married in 2014 in New York.

In 2010, Navratilova announced that she is undergoing treatment for breast cancer. She had ductal carcinoma in situ and had the tumor removed surgically, receiving radiation therapy later that year. The same year she was hospitalized in Tanzania, after developing high altitude pulmonary edema after attempting to climb Mount Kilimanjaro.

Throughout her career, Martina Navratilova has been involved with various charities for animal rights, underprivileged children, and gay rights. She is also the Health and Fitness Ambassador for AARP. She received the National Equality Award from the Human Rights Campaign in 2000.