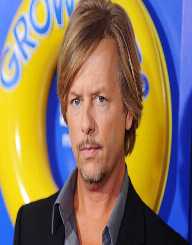 David Wayne Spade was born on July 22nd, 1964 in Birmingham, Michigan in the U.S. He is an actor, writer and a standup comedian who became famous during the 90s after featuring on the Saturday Night Live show. After this major appearance which gained him national recognition, Spade began appearing in films Tommy Boy, Coneheads, and Black Sheep. He also played a major role in his TV career by featuring in the award-winning show Just Shoot Me.

David Spade was born on July 22nd, in 1964. His father, Wayne M. Spade was a sales representative while his mother Judith M. Spade worked as a magazine writer and an editor. Spade had two brothers Andy and Bryan.

When Spade was only four years, his family migrated to Scottsdale, Arizona. For his high school education, he went to Saguaro High School after which he went to Scottsdale Community College. It did not take time before he finally transferred to Arizona State University where he got his business degree in 1986.

Spade used to perform in one of the university’s comedy show which was called Farce Side Comedy Hour. He later shifted to Los Angeles and opted to take on a comedy tour where he could uplift his profile by performing in nightclubs and different colleges. Soon, he landed himself the role of Kyle in Police Academy 4: Citizens on Patrol. Unfortunately, this movie did not perform well out there. In 1989, Spade was showcased at the 13th Annual Young Comedians Show together with other five comedians. It was from this exposure that Spade landed himself in Saturday Night Live a year later.

With Spade now working in the SNL show, he crossed paths with Chris Farley, and they became good friends. Both of them were great comedians and sooner or later, SNL producer, Lorne Michaels put both of them on the big screen. In 1995, Spade featured in Tommy Boy which was a movie production by Lorne Michaels. This movie became a hit for the due more so at the box office. After one year, Spade worked alongside Farley in releasing yet another film, Black Sheep. After this, he opted to leave SNL.

With Spade’s career at its peak, tragedy struck after his good friend and fellow actor Farley died. He had overdosed on drugs. This distressed Spade to the extent that he never attended his friend’s burial.

David Spade has not tied a knot with anyone yet. However, after having an affair with Jillian Grace, they had a daughter named Harper.