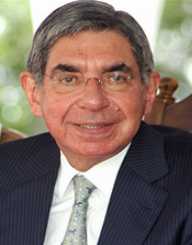 Author of the famous book ‘Horizons of Peace: The Costa Rican Contribution to the Peace Process in Central America’ and winner of the Nobel Peace Prize in 1987, Oscar Arias Sanchez is a former Costa Rican President.

Oscar Arias Sanchez is widely known for his peace-keeping efforts that led to the signing of the Guatemala accord and brought stability to Central America and ended a protracted conflict. Sanchez is highly educated in economics and law and has served as the President of Costa Rica twice. Under him, Costa Rica has flourished into a prosperous and happy nation.

Oscar Arias Sanchez was born on September 13, 1940. His birthplace is Heredia, near San José. Politics has been in the family of Sanchez with several family members holding critical posts in the government. His father Juan Arias was a lawyer and the head of the Costa Rica Central Bank. His mother Lillyan also came from a wealthy family. Sanchez is their eldest child and has two siblings.

Right from his childhood, Oscar had the big ambition of becoming the President. He was not physically fit – often suffering from asthma attacks, but he was a very bright student.

Oscar Arias Sanchez' early education began at a private Catholic school in Heredia. He then transferred to Colegio Saint Francis in San Jose. After passing out, he decided to become a doctor; however, his deep interest in economics made him leave that field soon. He took a few economics courses and studied law. He also joined the PLN - the country’s leading social democratic party - Partido Liberación Nacional.

Oscar Arias Sanchez went to London to further his knowledge of economics and obtained his Ph.D. from the University of Essex in 1971.

Oscar Arias Sanchez' first role in the Costa Rican politics was as an assistant to former President José Figueres Ferrer. At the same time, he also began working as a professor. In 1972, he became the Minister of National Planning and Political Economy. He became the International Secretary in 1975 and the General Secretary of the PLN in 1979.

In his publication ‘Costa Rica in the Year 2000’ Oscar Arias Sanchez envisioned a future where everyone had better income and a better standard of living.

As the President of Costa Rica

During the time of recession 1984-1986, Oscar Arias Sanchez made a promise - "Roofs, jobs, and peace." People showed faith in him, and he won the elections to become the President of Costa Rica on May 8, 1986.

Oscar Arias Sanchez took steps to fulfill the promise he made. He encouraged horticulture, and the country saw an increase in revenue. He also worked to develop tourist spots in the nation bringing additional cash into the economy. He improved the education and foreign relations. Through his efforts, Costa Rica grew into becoming a prosperous country. Throughout his term, he was an active supporter of peace and played a crucial role in ending the prolonged conflict in the Central American region.

After his term ended in 1990, Oscar Arias Sanchez became a visiting professor at Harvard University. He also founded three welfare centres - Center for Human Progress (1990), Center for Peace and Reconciliation (1990), and the Center for Organized Participation (1993).

When the Constitutional restriction over the number of Presidential terms was removed, Oscar Arias Sanchez ran again for the election in 2006. This time he aimed at fighting corruption and poverty. The election was close, but Oscar emerged the victor. He was sworn in on May 8, 2006, to act as the President of Costa Rica for the second time. Once again, he delivered on his promises.

His term ended in 2010. In four years. Oscar Arias Sanchez took measures to improve education and played a key role in resolving the Honduras Constitutional Crisis.

For his efforts to maintain peace in Central America, Oscar Arias Sanchez won the Nobel Peace Prize in 1987.

Oscar Arias Sanchez was also elected to the Board of Directors of the International Criminal Court's Trust Fund for Victims.

Oscar Arias Sanchez is married to Margarita Peñón Góngora, a biochemist from New York. They tied the knot in 1973. Margarita takes an active interest in her husband’s political work and has been a reliable support for him. They have a son named Óscar Felipe Arias Penón and a daughter named Silvia Eugenia Arias Penón.