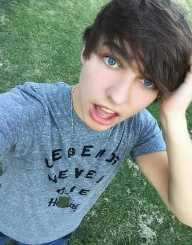 Colby Brock was born on January 2, 1997, in Stanley, Kansas, United States of America. He is an American social media personality. He is mostly known as a You Tuber and rapper. He is twenty years old. He posts videos on YouTube together with his best friend Vine Star, Sam Goldbach. Their Vine page has over half a billion views and more than one million followers. They, however, moved from posting videos on Vine and started posting videos on YouTube.

Colby Brock started collaborating with his friend Sam in making videos and posting them on their Vine account. Their initial target was to cause ruckus and trouble where people could see them, and so they opted for social media. They started posting videos that saw them doing stupid things to appease their viewers. At one time they posted a video of them riding shopping carts. Their adventures led to them being banned from the Oak Park Mall where they used to cause a lot of trouble and chaos.

They later grew up and figured that causing trouble may bring attention to them, but it was immoral for them to cause pain out of their own will. They were also afraid of the legal repercussions that would follow their actions. They now post videos that are good for the public and eye-catching. They use the motto ‘Onward and Upward’ to achieve their goals. They now make videos that reflect the positive aspects of life. Their videos target youths mostly. Colby Brock is witty and curious plus very naughty, but presently he has tried to adjust into a good person whom people can admire.

People love Colby Brock because of his witty personality. He is always happy and excited and very many things excite him. He moved to Los Angeles, California to realize his career. He makes his videos with the help of You Tuber and Vblogger ‘Big Nik’. Colby is very patient when making videos because the videos take time to become perfect. Colby and Sam have to persevere with the challenges that come with making videos. They use their time well to ensure that the videos they produce are well edited and fit for viewers. They sacrifice a lot to make their career success.

Colby Brock was raised in Kansas, United States but he moved to Los Angeles, California to pursue his career to the fullest. He attended Blue Valley High School, Stilwell, Kansas. No much is known about his family as his life is private from the public. He has made a name for himself as his career is taking a right path. He does not have a girlfriend.

Colby and Sam were once caught up in a controversy when they uploaded the video ‘Following the Fat Guy’ which was considered offensive to people who were overweight. They were asked to take down the video and learn to respect people who were not like them. When asked why they had posted the video, they stated that they wanted to become known to the public and the fastest way to do so what by posting funny videos on their Vine Account. They apologized and went on to make meaningful videos that were accepted by the public.