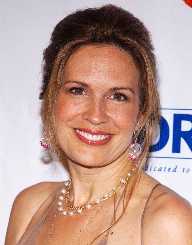 Dana Reeve was born Dana Charles Morosini on March 17, 1961, in New Jersey, USA. She was the daughter of Charles and Helen Morosini. Dana grew up in a fairly well off family in Greenburgh, New York. She went to Edgemont High School graduating in 1979. She enrolled at Middlebury College to study English Literature. In 1984 Dana graduated from college with honors.

She went to the Royal Academy of Dramatic Arts or RADA in London England. After leaving both RADA and Middlebury, Dana joined the California Institute of the Arts, based in California.

She started acting while at the California Institute. Dana had her breakthrough after performing at the Williamstown Theater Festival. She joined the Broadway acting group in New York. During her stay in New York, she performed in other theater halls apart from Broadway. She starred in a television commercial that promoted a laundry detergent for the Tide Company.

She became a television personality in 2000. She joined Lifetime Network as the co-host of the program Lifetime Live. She also did the theme soundtrack of the television drama In the Gloaming. She cast in another movie The Brook Ellison Story.

Dana wrote several books in early 2000. She titled her first book as Care Packages: Letters to Christopher Reeve from Strangers and Other Friends. In 2005 she got a publishing contract with Penguin Books. Her first commission was to write about her relationship with Christopher Reeve, her famous actor husband. She died before completion of the project.

Despite that, she authored some children’s’ books including Dewey Doo-it Helps Owlie Fly Again. She also incorporated an audio musical voice over on the audiovisual version of the book. Dana published the book in 2005. She produced a documentary aired on PBS titled The New Medicine. In the documentary, Dana explored how the blending of conventional and traditional herbs can provide basic solutions to common diseases ailing the populace. Dana did the movie Everyone’s Hero in 2006. Both movies were released after her death in 2006. They were posthumously dedicated to Dana and Christopher Reeve.

Dana got married to the Superman film actor Christopher Reeve on April 11, 1992. They stayed together until his death on October 10, 2004. Christopher Reeve died of heart failure. The couple had three children. Dana had one child William Elliot with Reeve. The other two Mathew and Alexandra were from Reeve’s previous marriage.

After her husband’s near-fatal accident while horse riding, Dana stopped riding for her entire life. Christopher Reeve became paralyzed from his neck downwards. She also became an activist for the rights of the physically disabled. She spent most of her time working with the charitable organizations in raising funds to help in medical research to help the disabled walk again.

On February 2, 2005, she was invited in Washington D.C. Dana attended the presidential State of the Nation address delivered by the then US President George W. Bush.

Dana was honored on many occasions. In 2005 she received the Mother of the Year Award. The following year was posthumously honored with the dedication of the film Superman Returns to her. She was mentioned on several platforms as a dedicated wife and mother who left her promising career to tend over her family.

Dana Reeve died of lung cancer on March 6, 2006, at the Memorial Sloan Kettering Cancer Center situated in New York. Before her death, she dispelled rumors of her suffering resulting from smoking. Dana publicly declared that she had never smoked any kind of cigarette in her life.

She is remembered as the promising Hollywood actress who left the industry to care for her paralyzed husband for almost nine years. She worked to encourage other families suffering from life crushing experiences on how to overcome the challenges.

In 2004 she founded the Christopher and Dana Reeve Paralysis Center. The center dedicates itself in the treatment and research of stem cells to combat the array of cancer ailments. She served as the chairperson of the foundation until her death.