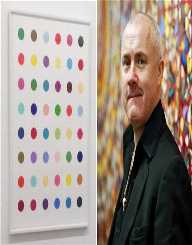 Damien  Hirst is a British artist, art collector, and entrepreneur. Born on June 7, 1965, he is a prominent member of Young British Artist and was a dominating figure in the UK art scene in the 1990s. Damien  Hirst artworks are primarily based on the theme of death and became famous with his artworks on the preservation of dead animals such as shark, sheep, and cow. One such famous work is The Physical Impossibility of Death in the Mind of Someone Living, which is a 14-foot painting of tiger shark immersed in formaldehyde in a vitrine. Damien  Hirst made a record of in September 2008 by selling a complete show Beautiful Inside My Head Forever in an auction at Sothebyraising £111 million ($198 million). This became a new record for a one-artist auction and broke his own record of auctioning The Golden Calf, an animal with 18-carat gold horns and hooves, preserved in formaldehyde for £10.3 million.

Damien  Hirst has gained international recognition and is considered as the richest living artist in the United Kingdom with an estimated wealth of at £215m in 2010 according to the Sunday Times Rich List. Despite all his success in the field of arts, Damien  Hirst has been on several occasions criticised of plagiarism by journalist and fellow artist. One such case ended up in court and resulted to out of court settlement.

Damien  Hirst was born on June 7, 1965, in Bristol. Damien  Hirst never saw his biological father, but recounts he had a stepfather at age two. His mum and stepdad however divorced when he was years. Growing up, Damien  Hirst was showing interest in arts, and his mother encouraged him in that pursuit. Damien  Hirst had his education at Allerton Grange School and there his art teacher was instrumental in getting him to enter sixth. He took two A-levels and had an E grade in art. With this, Damien  Hirst was refused admission to Jacob Kramer School of Art with his first application.

Damien  Hirst, however, continued to his pursuit and was finally given admission for a Foundation Diploma course. In 1983, Damien  Hirst patronized an exhibition of works by Francis Davison at the Hayward Gallery put together by Julian Spalding. Damien  Hirst was blown away with Davison’s ability to create abstract collages from torn and cut colored paper, of which he modeled his own. Damien  Hirst until 1985, work on London building sites. In 1986, he enrolled at the Goldsmiths, theUniversity of London to study Fine Art and graduated in 1989.

While at the Goldsmiths College, Damien  Hirst organized an independent student exhibition titled Freeze in July 1988, while in the second year. The exhibition took place in London’s Docklands in an unused London Port Authority administration block with sponsorship from the London Docklands Development Corporation. It was patronized by the likes of Charles Saatchi, Norman Rosenthal, and Nicholas Serota through the contacts of Michael Craig-Martin, a lecturer at the college. Damien  Hirst became a member of New Contemporaries show and another group show at Kettles Yard Gallery in Cambridge after his education.

Damien  Hirst collaborated with colleagues like Carl Freedman and Billee Sellman to organize two warehouse shows, Modern Medicine and Gambler in a Bermondsey former Peek Freans biscuit factory. The show was patronized by Saatchi who was amazed atHirst work and bought his first major animal installation, A Thousand Years, which comprised a large glass case containing maggots and flies feeding on a rotting cow's head.

From 1987 to 1990, Damien  Hirst collaborated with several other artists to mount exhibitions in both UK and France. He embarked on his debut solo exhibition, In, and Out of Love organized by Tamara Chodzkp, in an unused shop on Woodstock Street in central London in 1991.

Another one was held at the Institute of Contemporary Arts and the Emmanuel Perrotin Gallery in Paris. Charles Saatchi fell in love with Hirst works and in 1991 made Damien  Hirst an offer to fund any artwork he planned to do. The first of this work was The Physical Impossibility of Death in the Mind of Someone Living, which was a shark in formaldehyde in a vitrine. It was exhibited in the first Young British Artists exhibition Saatchi Gallery in North London in 1992 and was sold for r £50,000. Other works at the exhibition included, In a Thousand Years.

In 1993, Damien  Hirst made his major international presentation with Mother and Child Divided in Venice Biennale. It was a cow, and a calf cut into parts and displayed in a series of separate vitrines. In 1994, at the Serpentine Gallery in London, he organized the Some Went Mad, Some Ran Away where he displayed Away From the Flock (a sheep in a tank of formaldehyde). Damien  Hirst won the Turner Prize in 1995. He had his work Two Fucking and Watching that featured a rotting cow and bull band by New York public health official because of claims that some visitors would vomit upon seeing it. 1996, he organized the No Sense of Absolute Corruption in Gagosian Gallery in New York. Damien  Hirst wrote and directed the short film, Hanging Around, which starred Eddie Izzard.

Damien  Hirst was able to generate an estimated amount of £11 million during his exhibition, Romance in the Age of Uncertainty at Jay Jopling’s White Cube gallery in London in September 2003. A sculpture at the exhibition, Charity, was sold for £1.5 million to a Korean Kim Chang-IL. Damien  Hirst and Saatchi have had a strained relationship and parted ways. Saatchi sold Hirst work, The Physical Impossibility of Death in the Mind of Someone Living to an American collector Steve Cohen for $12 million. Damien  Hirst maiden Latin America exhibition, The Death of God, Towards a Better Understanding of Life without God aboard The Ship of Fools, was held at the Hilario Galguera Gallery in Mexico in 2006.

That same year at the Gagosian Gallery, London, Damien  Hirst exhibited alongside works of Francis Bacon. Some of his works included A Thousand Year, a formaldehyde work, The Tranquillity of Solitude, and four triptychs: paintings, medicine cabinets. In June 2007, his work Lullaby Spring became the most expensive work by a living artist as it was sold to Sheikh Hamad bin Khalifa Al-Thani, Emir of Qatar for $19.2 million.

Damien Hirst had a long-term relationship with girlfriend, Maia Norman. The two lived in California from 1992 to 2012 and had three sons, Connor Ojala, Cassius Atticus and Cyrus Joe. The two were never formally married. In early 1990 until almost ten years on, Hirst fell into heavy drug and alcohol problems, a condition he has admitted. He admits to using cocaine and drinks, which resulted in his strange behavior with an example of putting a cigarette at the end of his penis in front of journalists.