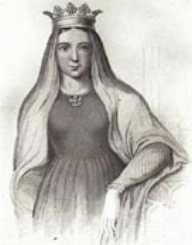 Matilda was born circa 7th February 1102, in England. Her parents were Henry I, King of England, and Matilda of Scotland. King Henry was also known as the Duke of Normandy.

Matilda's grandfather, William the Conqueror, invaded England in 1066. His invasion created a lot of land barons, most of whom had strong ties to France.

Her mother was a descendant of the royal family in Scotland. The union of Matilda with Henry I was beneficial for the Scottish royal family, giving them more legitimacy.

In 1108, the Archbishop of Canterbury took over the care of Matilda and her brother. King Henry traveled to Normandy without the children.

Henry V, King of the Romans, proposed to both Matilda's father and her mother separately. He wanted to marry Matilda, even though she was only seven years old.

The marriage proved beneficial for both families. Henry V belonged to one of the noblest dynasties of Europe. The wedding was attractive to King Henry I as it gave him an ally in France.

Henry V's dowry was worth 10,000 marks. The money allowed him to travel to Rome for his coronation. He was to become the Holy Roman Emperor.

Matilda traveled to Germany in February 1110. She was eight-years-old, and her husband-to-be was 24. The couple married on 10th April, and Matilda became Queen of the Romans on 25th July.

Once they were married, the Archbishop of Trier, Bruno, took over custody of Matilda.

Soon after their marriage, political unrest erupted. Henry arrested Chancellor Adalbert and several of the German princes. As a result, Pope Paschal II excommunicated them from the church.

Henry and Matilda arrived in Italy early in 1116. Due to this, Pope Paschal II fled the country. The couple established themselves in Italy over the following 12 months.

They were crowned at St. Peter's Basilica, and during this time, Matilda took the title of Empress of the Holy Roman Empire. She took on her role of the monarch, performing various duties daily.

Henry returned to Germany in 1118 to quell rebellions that were taking place. Matilda remained in Italy to govern. Two years later, she traveled to Germany to see Henry.

Henry died on 23rd May 1125. The couple had been traveling together in Germany, although Henry was ill with cancer.

Matilda had the insignia of the Empire, but Archbishop Adalbert talked her into giving it to him. As a result, he appointed Lothair of Supplinburg as the King of the Romans. Lothair was an enemy of Henry's.

With no children and 23 years of age, Matilda gave up her land holdings in Germany. Although marriage proposals started arriving, she returned to Normandy.

Fight for the Throne

In 1120, Matilda's brother, William, died in a boat accident. After Henry's death in 1125, King Henry decided to endorse Matilda as the rightful heir to the throne. He didn't have any male heirs to succeed him.

The king looked for a new husband so Matilda could re-marry. He decided on Geoffrey of Anjou, which would form an alliance with the territory to the south of Normandy.

King Henry refused to hand over his lands to the young couple. Due to this, Matilda and Geoffrey supported the rebels in fighting the king.

King Henry died suddenly, so Matilda and Geoffrey began to march to Normandy, taking control as they went. Meanwhile, Stephen of Blois sailed for England and claimed the throne when he arrived in London.

Matilda's third son arrived in July 1136. Over the next three years, Matilda established her knights in the Argentan area.

Over the next two years, several battles ensued for Stephen. In 1139, Matilda and Geoffrey invaded England. Over the next few years, Matilda fought continually, but couldn't gain control of England.

Matilda remained in Normandy, acting on behalf of Henry as needed. She also advised Henry in political matters on occasion.