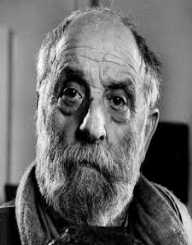 César alias César Baldaccini was a renowned and talented French sculptor born in 1921 and died in 1998. He used his animal and insect representations along with radical compressions to express his views as a devout member of the New Realism movement. The son of Italian immigrants began working at a young age while doing part-time studying.

His early sculptures were made form quite economical materials he could gather, owing to it all to poverty. However, his story later changed when his work began getting attention and even began selling commercially. Among some of his notable work was Le Pouce (1965), Conserve expansion - Martial Raysse, and The Flying Frenchman.

César was born Cesare Baldaccini on January 1, 1921, in Marseille, France 1998. His father owned a bar and also worked as a cooper.

Although César quit school when he was 12 just so he could work and earn a living, he would later continue his education. From 1935 till 1939, he was studied at Ecole des Beaux-Arts, Marseilles. Afterward, in 1943, he joined Ecole des Beaux-Arts in Paris. By 1948 he was done with his studies.

In 1952, the talented César was determined to begin making his sculptures even though he lacked the materials to do so. Therefore, he put together scrap metal pieces and went ahead to make sculptures. Right away, his insect, nudes, and animal sculptures began earning him a reputation.

Thereafter, in 1954, César had the chance to showcase his work solo at Galerie Lucien Durand in Paris. Before long, his efforts were highly recognized. Hence, by 1960 he was ranked among top sculptors in France. Also, in that year, he joined New Realists (the Nouveaux Réalistes) Klein, Arman, and Pierre Restany among others. They all regarded their inspiration to be from urban life.

César began using plastics in 1965 before shifting to polyurethane and later also used molten crystal. He made the trophy the César du cinéma, an award meant for the winner of French cinema.in January 1978, he became Knight (Chevalier) of the Légion d'honneur. Years later, in 1993, he rose to the rank of Officer (Officier)

At the time of his death, César was married to Rosine Baldacini. They had a daughter, Anna