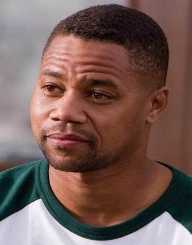 American actor Cuba Gooding Jr was born on the 2 January 1968 in The Bronx, New York. He has three siblings: Omar, Tommy, and April. His parents were Shirley Sullivan and Cuba Gooding. Both of his parents were musical and sang in groups. The Gooding family moved to Los Angeles in 1972 for his father’s career. Later, his parents divorced, and his mother raised Cuba Gooding.

In 1984 at the Summer Olympics in Los Angeles, Cuba Gooding Jr got a gig as a break dancer appearing alongside Lionel Ritchie in the closing ceremony.

In 2002 Cuba Gooding Jr was given a star on the Hollywood Walk of Fame.

In 2016 he was nominated for a Primetime Emmy for Outstanding Leader Actor in a Limited Series or a Movie for American Crime Story (2016) for his portrayal of O.J. Simpson.

Cuba Gooding Jr was married to Sara Kapfer in 1994. They divorced in 2017, having legally separated in 2014. The couple had three children together.