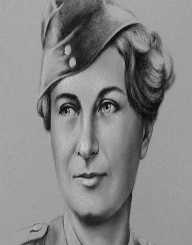 Virginia Hall studied at prestigious schools including Roland Park Country School, Radcliffe College, and Barnard College. At the latter, she learned several languages, including French, Italian, and German. She wanted to complete her studies overseas, and with the help of her parents, she traveled throughout Europe, studying in France, Germany, and Austria.

In 1931, Virginia Hall managed to get herself a position at the American Embassy in Warsaw, Poland. She worked as a Consular Service Clerk.

Approximately one year later, Virginia Hall accidentally shot herself in the leg while hunting. Her leg had to be amputated from the knee down. This unfortunate turn of events put an end to her aspirations of having a diplomatic career, and she resigned from the Department of State in 1939.

When the Second World War broke out, Virginia Hall was in Paris. She joined the Ambulance Service while France was fighting, and when the fighting stopped in 1940, she found herself in the Vichy territory which was controlled by the Germans.

Virginia Hall escaped to England and enlisted into the Special Operations Executive (SOE). She was sent back to France, and for the next 15 months, under the guise of being a reporter for the New York Post, she helped coordinate the French Underground activities in Vichy and occupied France.

The Germans unexpectedly took France towards the end of 1942, and Virginia Hall only just managed to escape to Spain, as German suspicion of her was growing. She worked out of Madrid for a period of time, and then in March 1944, Virginia Hall joined the Special Operations Branch of the U.S. Office of Strategic Services (OSS).

She requested to return to occupied France, and her request was granted. Once again she went to work. She found safe houses and marked drop zones for supplies and commandos. Virginia Hall also assisted with the training of three battalions of Resistance fighters to wage war against the Germans until the Allied troops took over upon their arrival some time later.

In 1951, Virginia Hall joined the Central Intelligence Agency (CIA), as an Intelligence Analyst on the French parliament. She had married by this time, and her husband was a fellow agent. She retired in 1966.

Judith L. Pearson wrote Virginia Hall's story, and the book was published in 2005. It was called, The Wolves at the Door: The True Story of America’s Greatest Female Spy.

There is also a biography that has been written. However, it is only in French. Written by Vincent Nouzille and published in 2007, it is called, L’Espionne: Virginia Hall, une Americaine dans la Guerre.

1943:   Honorary Member of the Order of the British Empire (MBE)

Virginia Hall married Paul Goillot in 1950. He was a fellow agent of the Office of Strategic Services.