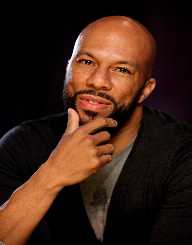 Lonnie Rashid Lynn, Jr. aka Common is a rapper appeared on the rap music scene in 1992 with his album Can I Borrow a Dollar? His professional handle is Common. Originally he called himself Common Sense but had to discontinue using it after a Californian band of the same name objected. Common was born in Chicago, Illinois and his parents were Mahalia Ann Hines and former basketball player Lonnie Lynn, His parents divorced when Common was young, and Common was brought up by his mother in Chicago. His father moved to Colorado, but they kept in touch

Common was educated at Luther High School South in Chicago but dropped out of high school to work on his debut album, Can I Borrow a Dollar?.

After Can, I Borrow a Dollar? was released 1992, he soon built up a following.

The single Take It EZ was well-received by rap fans, and he gained further popularity working with the Soulquarians.

His follow-up album Resurrection reached number 27 on Billboard’s Hip-Hop Chart. His third album One Day It’ll All Make Sense reached number 12 on the rap charts. He was subsequently signed with MCA Records. Common recorded Like Water for Chocolate which was a huge success and reached number 5 on the hip-hop charts. His followup album Electric Circus reached number 9 on the charts and had two top singles: The Light and The 6th Sense. His next album released by Geffen Records in 2005 was Be. The album was another success reaching number one on Billboard’s Hip-Hop and Number 2 on the Pop Chart. Produced by Kanye West, the album won four Grammy nominations in 2006. Kanye West also produced Finding Forever in 2007 which reached number one on the Billboard pop charts.

In January 2017, an episode of The Simpsons entitled The Great Phatsby centered around a (fictional) rap mogul Jay G. The episode included songs produced by Jim Beanz with guest verses from various rap artists including Common and Snoop Dogg.

Common had won numerous awards starting in 2003 when he won a Grammy for Best R&B Song for Love of My Life as well as a BET Award for Video of the Year. Other awards include BET Hip Hop Award for CD of the Year 2007 for Finding Forever. BET Hip Hop Award for Best Lyricist of the Year for 2006 and 2007, a Golden Globe for Best Original Song for Glory in 2014 and an Academy Award for Best Original Song (2015). In 2016 he won a Grammy for Best Song Written for Visual Media for Glory. Common also won a NAACP Image Award for Outstanding Supporting Actor in a Motion Picture for Selma (2015).

Atria Books published Common’s memoir One Day It’ll All Make Sense in 2011. As well as music and acting, he has done modeling. Common has appeared on posters for The Gap and promoted various brands including the Diesel campaign for Only The Brave, a fragrance and launched a clothing range with Microsoft called Software.

Common was a vegan but has since added fish to his diet.

Common has dated various well-known women including Serena Williams. Common stated in a 2014 interview that they almost married.

Common supports animal rights and has worked with PETA on the Think Before You Eat campaign. He founded the Common Ground Foundation to help underprivileged youth. The foundation offers programs relating to educational and leadership development, creativity, literacy, and empowerment. Common also lends his celebrity to raising AIDS-HIV awareness.

Common initially used the handle Common Sense but had to change it to simply Common after a Californian band with the same name sued him.