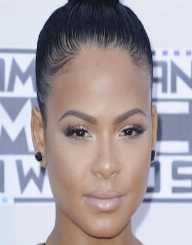 Christina Milian is an American singer and actress who is best known for her song When You Look at Me and the theme song to Kim Possible, Call Me, Beep Me.

Christina Milian was born on 26 September 1981 in Jersey City, New Jersey. Her parents are Don Flores and Carmen Milian. Her family moved to Waldorf in Maryland while Milian was still young. She has two younger sisters, Danielle and Elizabeth. Milian wanted to be a performer from an early age.

At the age of nine, she was competing in talent shows and had appeared in advertisements for the cereal Honeycomb and Wendy’s chain of restaurants. Seeing her daughter’s talent, Carmen Milian left her husband and took her daughters to L.A. Don Flores, and Carmen Milian divorced when Christina was thirteen years old. After the divorce, Christina adopted her mother’s maiden name, and it was under the Milian name she became famous.

After six months in L.A, Christina Milian began working with music producer Rodney Jerkins. Milian would work on singing and song writing during this time. Milian’s breakthrough came in 2000. She provided vocals on the lead single, Between Me and You, on Ja Rule’s album, Rule 3:36. The single charted in the U.S.A and the U.K. Milian also contributed to Jenifer Lopez’s song, Play, Milian provided backing vocals and co-wrote the track.

Milian was able to get her recording deal through her work with other artists and signed with Def Soul Records, which was linked to Murder Inc and was the Def Jam parent label. Milian recorded her debut, self-titled album in Sweden in 2001. It charted in the Netherlands and U.K but was not released in America due to 9/11 occurring just before it was due to release. Two singles from the album were released though, AM to PM and When You Look at Me.

Milian’s work received mixed reviews, and she was mostly unhappy with the creative direction her label was trying to take her. Milian’s next chart success was a collaboration with the British rapper Romeo on the track. It’s all Gravy. The song was a top ten hit in the U.K. In 2002, Milian recorded the song for the Disney Channel’s animated series Kim Possible. The song was titled Call Me, Beep Me, and brought Milian colossal exposure. Milian also worked with another Disney star, Hilary Duff, on Duff’s album Santa Clause Lane.

Christina Milian’s label was dissolved after her debut album, and she was moved to another Def Jam label, Island Records. Milian toured extensively before releasing her second album, It’s About Time, in 2004. The album featured a mixture of ballads and club tracks. The club tracks were well received and the more excellent R&B influence in her music was praised, but the ballads on the album received a lukewarm reception. The lead single from the album was Dip It Low, which broke into the top five in the U.K and the U.S.A.

Milian released her third album in 2006. The album, So Amazin, was produced with Cool & Dre. It reached number eleven in America. The album’s lead single, Say I, reached the top five in the U.K charts, but failed to break the top twenty in America. A week after the release of her album, Milian was dropped by Def Jam. She signed with MySpace Records, a subsidiary of the social media website MySpace.

Her first release under the new label was a song Milian wrote herself, Us Against the World. The song was supposedly for an upcoming album. However, in 2009 Milian signed a deal to release an album with Interscope Records. She began working with The-Dream and Tricky Stewart. By 2012 Milian had still not released a fourth album and moved to the Young Money label.

As the new album continued to be delayed, Milian did some collaborations with Lil Wayne. Milian continued to release singles and collaborations, but no fourth studio album was forthcoming. She was credited as one of the co-writers on Justin Bieber’s 2010 hit, Baby.

Career in TV and Film

Christina Milian got her first role in television on the Disney Channel which she worked on as a host while still a teenager. She appeared in the show MovieSurfers, as Tina. Milian also had bit-part roles in the TV show, Sister, Sister and in the film, American Pie. She also worked as a host on MTV. She got her first lead film role in 2003. She starred alongside Nick Cannon in Love Don’t Cost A Thing. In 2005, Milian played central character Linda Moon in Be Cool, a sequel to Get Shorty. The film also starred John Travolta and Uma Thurman. It was a modest commercial success.

Milian also appeared in the Wes Craven-directed horror, Pulse. Milian also made appearances in the Def Jam Vendetta and Need for Speed: Undercover videogames. In 2009, Milian appeared in Ghost of Girlfriends Past. She became the social media correspondent for the singing contest The Voice in 2012.

Milian featured in the show Dancing with the Stars in 2013. In 2015, E! ran two seasons of the reality show Christina Milian Turned Up. The show followed Milian, her mother, and two sisters. Milian played a central character in the Fox comedy, Grandfathered, which was canceled after twenty-two episodes.

Christina Milian dated Nick Cannon, whom she met on the set of Love Don’t Cost A Thing, for two and a half years. The two split due to Cannon’s constant infidelities. She then dated Andre Lyon from Cool & Dre, but their relationship ended due to work commitments.

In 2009, she announced her engagement to the producer The Dream. They married but divorced before the birth of their child, Violet Madison Nash. It was announced that Milian had become engaged to Jas Prince in 2013, but this was called off the next year. It has been rumored that Milian was dating Lil Wayne in 2015.