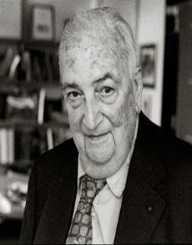 Jean Dausset was born on October 19, 1916. He was a French immunologist. In 1980, he won the Nobel Prize for Physiology or Medicine. He studied medicine while he was in the university. He founded the Centre D’eute du Polymorphisme Humain.

Jean Baptiste Gabriel Joachim Dausset was born on October 19, 1916, at Toulouse, France. He was born to Henri Dausset who was a physician and Elizabeth Brullard Dausset. His family moved to Paris when he was eleven. He attended the Lycee Michelet where he earned his baccalaureate in mathematics. He later enrolled at the University of Paris to study medicine. During World War II, he was sent to serve the French Army in North Italy. In 1940, he returned to Paris where he passed his medical internship entrance examination.

Immediately Jean Dausset received the title of the medical intern; he travelled to North Africa to join fighting forces. In 1944, he returned to Paris. He was given the task of collecting blood samples in collaboration with the Regional Blood Transfusion Centre at Hospital Saint-Antonie. He conducted his first research with Professor Marcel Bessis. In 1946, he became the director of laboratories at the National Blood Transfusion Centre. He worked on immune hematology methods for red blood cells while at the Centre. He also conducted studies to ascertain the existence of certain antibody types in the body.

In 1952, Jean Dausset started researching the immune genetics of blood cells. In 1958, he introduced leucocyte antigen MAC which came to be known as HLA-A2. He also served as an advisor to the Cabinet of the National Ministry of Education for three years. In 1958, he became an assistant professor of Haematology at the Faculty of Medicine in Paris. In 1963, he became a professor, and he later became the head of the Department of Immunology at Hospital Saint Louis. He continued his research and study in areas like agglutination and antibodies among other areas.

In 1965, Jean Dausset described the first tissue group system which came to be known as HLA-8. In 1968, he made numerous contributions to the establishment of the Research Institute in Blood Diseases where he also served as an assistant director. In the same year, he was made director. In 1977, he became the head of the Immunology Department at the University of Paris. In 1984, he established the Centre for Genome Research. He used his Nobel Prize money to create the centre. In 2003, he became the president of the centre. He was also the chairman of the France Bone Marrow Grafts Registry.

In 1980, Jean Dausset received the Nobel Prize in Physiology or Medicine jointly with Baruj Benacerraf and George Snell for their discoveries concerning genetically determined structures on the cell surface that regulate immunological reactions. He was also a recipient of many awards including the Wolf Prize in Medicine, The Gairdner Foundation International Award and the Robert Koch Prize among others.

In 1963, Jean Dausset married Rose Mayoral with whom he had two children, Henri and Irene. He died on June 6, 2009, in Majorca, Spain. He died at the age of ninety two.