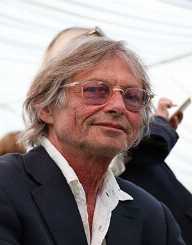 Bruce Woodley was born in July 25, 1942. He is an Australian singer and songwriter. He was a founding member of the pop group ‘The Seekers’. He was also a co-composer of the song ‘I Am Australian’.

Bruce Woodley William was born on July 25, 1942, in Melbourne, Victoria in Australia. He attended Melbourne High School. He went to school with Athol Guy and Keith Potger who are fellow seekers. In the 1960s, he formed a folk music trio called ‘The Escorts’ with Athol and Keith. In 1962, they became ‘The Seekers’ after Judith Durham joined them.

The Seekers was a success in Australia. In 1962, they went to London where they recorded four international hit singles produced and written by Tom Springfield. Bruce played the guitar, banjo and the mandolin. Bruce was also the chief songwriter. In 1968, the group disbanded. In 1965, while in London he met Paul Simon with whom he wrote ‘Red Rubber Ball’ which was a hit and ranked number one for the United States group ‘The Cyrkle.’ They also wrote ‘Cloudy’ and ‘I Wish You Could be Here’ which were later recorded by ‘The Seekers.’ Bruce later decided to go solo. He worked at Pennywheel which was a production company. He released several productions for children including ‘Build an Alphabet’ and ‘Friday St. Fantasy’ among other productions.

In 1969, Bruce traveled to the United States in order to sell songs that he had written. In the United States, he collaborated with writers such as Hans Poulsen and John Farrar. They wrote the song ‘Boom-Sha-La-La-Lo’ which was a hit for Hans. In 1971, he released his first solo album titled ‘Just Good Friends’ which was a success. He also wrote and sang the hit song ‘Love Me Tonight.’ Bruce later reunited with ‘The Seekers’ and recorded singles such as ‘The Nimble Song’ and ‘I Saw It All With Trans Tours’ among others. Woodley wrote several songs for the group including ‘The Sparrow Song,’ ‘Giving and Taking,’ ‘Can we Learn to Get Along’ and ‘Standing on Shaky Ground’ among others.

In 1977, he left ‘The Seekers’ again and was replaced by Buddy England. Bruce continued to pursue his career in advertising, productions, and songwriting. In 1987, he became a co-composer for the set of songs known as ‘I Am Australian.’ He worked alongside songwriters Rose Bygrave and Dobe Newton. In 1988, he reunited with The Seekers to perform ‘The Carnival is Over’ at Expo 88. In 1989, The Seekers released the album ‘Live On’ whose title track was composed by Woodley. He also composed other tracks such as ‘One Step Forward, Two Steps Backward,’ ‘How Can a Love so Wrong be so Right,’ ‘Taking My Chances with You’ and ‘The Streets of Serenade’ among others. The song ‘I Am Australian’ was a success and Woodley performed it with Karen and the Australian Children’s Choir in 1991.

He married Sally with whom he has two children, Claire and Dan. Bruce Woodley and Sally are currently divorced. He is a member of the Advisory Board of the Organization TLC for Kids. He was also once a chairman of the Victorian Branch of the Variety Club.