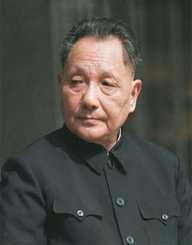 Deng Xiaoping was born 22nd August 1904, in Guang'an County, in Sichuan Province, China. Deng was one of seven children, but his mother died when he was very young. His father had a university education, and he strongly encouraged Deng's education.

Deng completed his schooling in 1919, and he then traveled to France with 80 of his classmates. They enrolled to take part in the Diligent Work Frugal Study Movement. He sailed to France when he was 16. Deng studied for a short while, but he then started working. He trained as a fitter at an iron and steel plant, and he moved to the area in 1921.

Deng began to study Marxism after meeting some older Chinese students. He became politically involved as a member of the Chinese Communist Youth League in Europe.

In 1924, Deng became a member of the Chinese Communist Party. Within a short period, he became one of its most prominent members. Deng traveled to the Soviet Union in 1926 and studied in Moscow.

Deng returned to China in 1927. He enlisted in the army in the northwest of China.

After leaving the army, Deng lived in Wuhan, the city where the Communists had their headquarters. From 1927 to 1929, Deng settled in Shanghai. Deng quickly rose through the ranks because so many of his Communist friends were killed.

In 1929, Deng fought the Kuomintang. There were many deaths and casualties to the Communists. Hugely affected by the defeat, Deng left the Communist Army. He appeared in Shanghai sometime after that, where leaders of the Communist Party had gone underground. It is not clear what happened with Deng during this period.

In 1931 and 1932, Deng became Secretary to the Party Committee in two of the local areas. Based in Jiangxi, Deng then became Director of the Propaganda Department of the Provincial Party Committee in 1933. Party members began a power struggle, and they removed Deng from his role because he supported Mao.

The Communists retreated from Jiangxi in 1934. Approximately 100,000 men escaped, and they went on a long march through China. One year later, only 8,000 to 9,000 of the men arrived in Shaanxi, one of the northern provinces.

Mao Zedong became the leader of the Communist Party of China, and Deng became a prominent member of the party.

Deng remained at the battle-front over the next two years. He became the Deputy Political Director of several restructured divisions of the Communist army. When Japan lost in World War II, the Communists and the Kuomintang started fighting once again. The Communists continued to increase their territory. During this time, soldiers quickly joined their ranks after deserting the Nationalist army.

Deng played critical roles during crucial times during the war. The Communist Party won the battle, and they established the People's Republic of China.

From 1949 to 1952, Deng controlled the takeover of the southwest by the Communists.

In 1952, Deng moved to Beijing where he worked in the Ministry of Finance over the next two years. He became Deputy Premier in 1954.

In 1956, the party installed Deng as the Head of the Communist Party's Organization Department. He continued to support Mao, but it was evident Mao's ideas on capitalism weren't working. Mao stepped down from the presidency in favor of Deng's long-time colleague, Liu Shaoqi. Liu and Deng began economic reform which proved popular.

Mao believed the reforms would let capitalism come back. He led the Cultural Revolution in 1966, and he forced Deng to retire from all the positions he held.

Deng gradually became involved again with politics, and in 1974 he became First Vice-Premier. Deng quietly began to reform the economy again. Deng's leading supporter, Zhou Enlai died in 1976. Deng fell out of favor once more with Mao, and he didn't take over Zhou's position. Mao then relieved Deng from all his leadership positions.

Mao died in September 1976, and Deng took over as the leader of China. He consolidated his position over the next few years, gradually getting rid of his opponents.

In 1978, Deng traveled to several nearby countries like Singapore and Malaysia. The United States officially recognized the People's Republic of China in 1979. During this period, China also opened to foreign trade.

After 1980, Deng continued his economic reform. As a result, he began negotiations with the UK to return Hong Kong to the Chinese. The Portuguese also agreed to return Macau to China.

On 19th February 1997, Deng died. Cause of death was a lung infection, and he also had Parkinson's disease.

The Chinese recognize Deng as one of their greatest leaders, opening-up and modernizing China to the rest of the world.

Deng married when he was young, but his first wife died during childbirth, along with the baby. Deng then married Jin Weiving, but during his political persecution in 1933, she left him.

In 1939, Deng married Zhuo Lin. The couple had five children, and they were still together at the time of Deng's death.